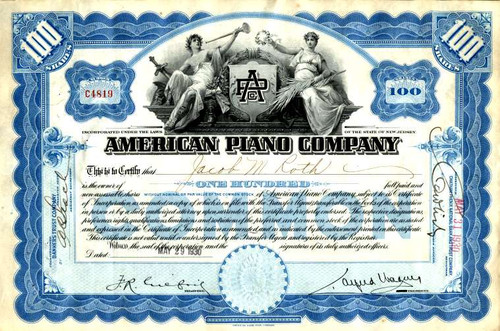 Beautifully engraved uncancalled stock certificate from the American Piano Company issued in 1930. This historic document was printed by the American Banknote Company and has an ornate border around it with a vignette of two allegorical women flanking the company's logo. This item has the printed signatures of the Company's President and Secretary. 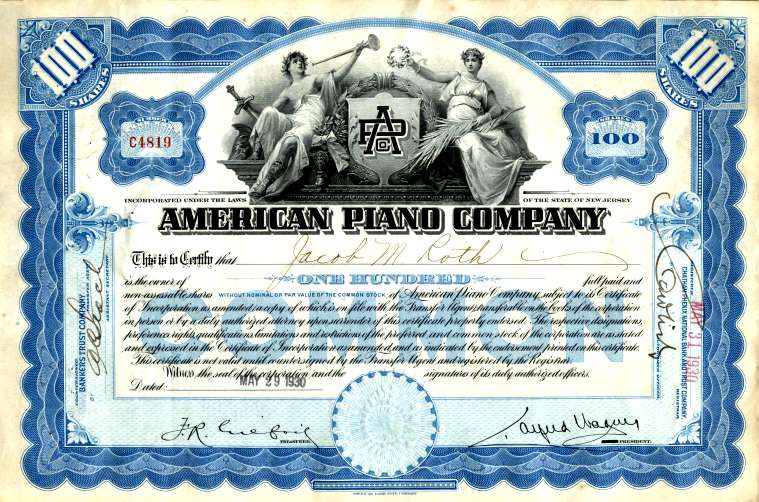 Certificate Vignette
American Piano Company (abbr. Ampico) was an American piano manufacturer located in East Rochester, New York, which was known from the beginning for the production of high quality player pianos. The company was established in 1908 under the aegis of Wm. Knabe & Co. of Baltimore as a merger between Chickering & Sons of Boston, Haines Brothers, Marshall & Wendell, and Foster, Armstrong & Company, all of Rochester, New York. From 1913 Ampico was one of the leading producers of reproducing pianos, the others being Duo-Art (1913) and Welte-Mignon (1905). The player piano and reproducing mechanism was designed by Charles Fuller Stoddard (18761958). A great number of distinguished classical and popular pianists, such as Sergei Rachmaninoff, Leo Ornstein, Winifred MacBride, and Marguerite Volavy (188619??), recorded for Ampico, and their rolls are a legacy of 19th and early 20th century aesthetic and musical practice. In 1930, the American Piano Company was in economic difficulties and was reorganized in Delaware as the American Piano Corporation. Despite the Ampico's decline, the company did not officially close until 1941, which exceeded past the Great Depression. The last model introduced was the Ampico Spinet Reproducing Piano, which had all the functionality of a reproducing piano, and although having a low cost of $495, still failed in sales. In May 1918, The Music Roll Division of the American Piano Company became a separate company and henceforth was named Rythmodik Music Corporation, based in Belleville, New Jersey. History from Wikipedia and OldCompany.com (old stock certificate research service)