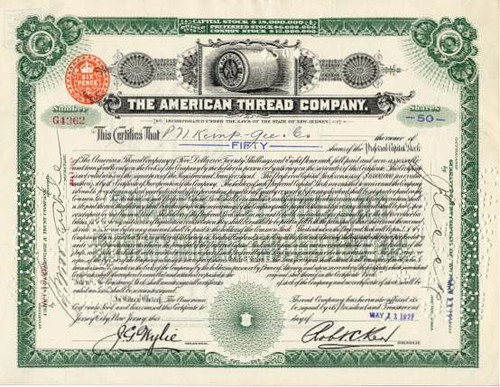 Beautifully engraved certificate from the American Thread Company issued in 1925. This historic document has an ornate border around it with a vignette of a spool of thread. This item is hand signed by the Company's President and Treasurer and is over 79 years old. 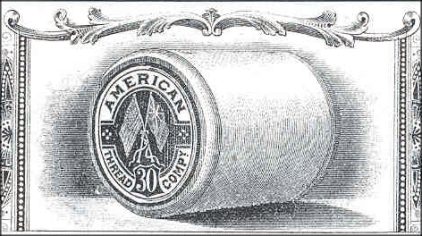 Certificate Vignette
Manufacturing grew rapidly in the early 1800's, as factories were constructed to take advantage of the waterpower provided by Connecticut's many fast-flowing rivers and streams. Though some businesses--such as the mills that grew up along Hartford's Park River--were located in existing communities, many new towns were created at this time. In order to attract and maintain a workforce, many factory owners provided all their workers' needs: housing, churches, schools, libraries, and company stores where workers could find everything they needed for their families. While some factory owners were truly concerned with their employees welfare, others tried to restrict their freedom and control their lives. Hours were long, work was hard, and often every member of the family, including young children, were employed. In 1898, the American Thread Company absorbed the Willimantic Linen Company, which had been manufacturing textiles in Willimantic since the early 1850s. Most of the workers in the city were employed its mills. The American Thread Company manufactured spool cotton, thread and hosiery yarn. The plant was located along the Main Street in Willimantic. The company grew and built 6 main mills, with other smaller buildings making up the complex. The mills had their own stables for housing the many horses that were required, and of course the company store. The mill buildings were made of stone quarried from the Willimantic River Mill Number 4 was the largest mill building not only in the country, but in the world. A German manufacturing company owned a building almost as large. There was a great competition between these two mills to be the biggest. The German company finally built an addition to their own mill, making it larger than Mill Number 4. American Thread could not have this! They immediately set to work building a small addition to Mill Number 4, just enough extra space to make them the biggest mill again. Mill Number 4 was also the first mill to have electricity. One of the owners was an acquaintance of Thomas Edison, who was working on his invention for electric lighting at the time. Thomas Edison installed an early lighting system in the mill. The sparks the lights made added to all the machine oil in the mill caused dangerous conditions. When he improved on his invention he installed his new lights in Mill Number 4. Working conditions were often harsh in America's mills. The mills were hot in the summer, cold in the winter, very dusty, and very loud from the noise of the machinery. The work day was 12 to 14 hours, and children were often employed full time because they could be paid less for the same amount of work. Even after child labor laws were established many factories ignored them. During the 1890s American Thread was producing 85,000 miles of thread a day. The company established mills in what became Willimantic and Milo, Maine just for the production of spools. The spools were shipped to Connecticut to wind the thread. A lot of the work in factories was piece work; people got paid for how many pieces of product they made, not how many hours they worked. In 1925 the workers at the American Thread Company went on strike because their wages had been cut, and they wanted better working conditions. Management refused to negotiate. They also evicted the people who lived in Mill owned housing. A "tent city" was set up along the banks of the Willimantic River by the city and the union. The families stayed in the tent city for the summer. As the weather got colder, the need to find new jobs and new homes became urgent. By winter the tent city was no longer necessary. Most workers did not go back to American Thread. The company went to northern New England and Canada and hired French Canadians to take the place of the striking workers. The new workers were paid less than the striking workers were, but they were desperate for jobs and jumped at the opportunity. Many immigrants came to Willimantic to work in the mills. Before the French Canadians came the Irish. Later came Italian, Polish, German, Estonian, Ukraine, Latvian, Lithuanian, and Puerto Rican immagrants. In June of 1985 the American Thread Company closed its doors and relocated. Many people were left jobless. It was during this time that the Covenant Soup Kitchen opened its doors to help feed the many citizens left jobless. Either people took jobs in what companies were left in Willimantic, or traveled elsewhere to find work. The mills fell into decay. Mill Number 4 burnt in 1995 due to vandals. Today the remaining buildings are being refurbished and will be office space. A large park is planned for the complex which was once the American Thread Company. Historical information was obtaind from the Mill Museum website.