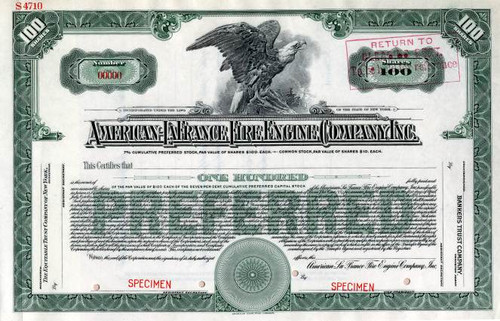 Beautifully engraved RARE SPECIMEN Preferred Share Certificate from the American - La France Fire Engine Company printed around 1915. This historic document was printed by the American Banknote Company and has an ornate border around it with a vignette of an eagle. We have only seen a few of these highly desirable certificates.

Certificate Vignette
In 1900, the same people who owned the American Fire Engine Company, assembled a second group of fire engine manufacturers (including LaFrance Fire Engine Company of Elmira, NY), and named this new firm the International Fire Engine Company. On October 1, 1903, the directors of American and International proposed merging those two companies, and the merger was completed in early 1904. The new company was dubbed the American-LaFrance Fire Engine Company, and was headquarterd at the old LaFrance plant in Elmira, NY. One of the oldest and most famous fire apparatus manufacturers in America is the American LaFrance Fire Engine Company. With roots that go back to approximately 1832, the companies that went on to become American LaFrance built hand-drawn, horse-drawn, and steam-powered fire engines. Founded in 1873 by Truckson LaFrance and his partners as the LaFrance Manufacturing Company selling hand powered equipment. The International Fire Engine Company, corporate predecessor of American LaFrance, built some steam power fire engines between 1903-1907. Apparatus built by International included everything from horse drawn steamers, hose wagons, and hook & ladders to chemical engines, water towers and combinations. The American LaFrance Fire Engine Company was officially formed in 1903. Its corporate offices and manufacturing plant were located in Elmira, New York. It also operated a Canadian plant in Toronto, Ontario, where it sold apparatus under the name Lafrance-Foamite, until 1971. ALF delivered its first motorized fire engine in 1907. Over the years, American LaFrance built thousands of fire trucks including chemical engines, combination pumpers, aerial ladder trucks, Aero Chief snorkel trucks, and even airport crash trucks. The classical style of the American LaFrance apparatus is easily recognized. Some of the company's innovations led to changes in the industry, most notably the cab forward style cab. The company has recently undergone a major rebirth and is once again turning out distinct custom fire trucks and other emergency vehicles. In 1995, the company was bought by Freightliner LLC, which is a subsidiary of Daimler AG. Freightliner continued to utilize American LaFrance's original nameplates and designations including the Eagle custom chassis. Many of their Liberty products are built on Freightliner LLC M2 or Sterling Acterra chassis. ALF has additional manufacturing facilities in Ephrata, Pennsylvania, Sanford, Florida, and Hamburg, New York. As of 2005, they are the fifth largest manufacturer of emergency vehicles in North America. In December 2005, it was announced that Freightliner had transferred the ownership of American LaFrance to the New York-based investment firm, Patriarch Partners, LLC. The headquarters and main plant in Ladson, South Carolina were not included in the transaction. However, Patriarch Partners were allowed to use the plant until early 2007, when DaimlerChrysler began using the plant for assembly of the Dodge Sprinter. Under new ownership ALF relocated within the Charleston, South Carolina metro area in summer 2007 to a brand new facility including manufacturing and corporate HQ, with close to 500,000 sq ft (50,000 m²) of total space On January 28 2008, American LaFrance filed for Chapter 11 bankruptcy. On July 25 2008, the company emerged from Chapter 11 bankruptcy with a revised business plan to transfer the firetruck body building portion of the business to the remaining Hamburg, NY (formerly RDMurray Inc.) and Ephrata, PA (formerly Ladder Towers Inc.) facilities. The Summerville, SC plant would continue to manufacture fire truck cab and chassis, but would increase their focus on vocational vehicles and the Condor vehicle line. About Specimen Certificates Specimen Certificates are actual certificates that have never been issued. They were usually kept by the printers in their permanent archives as their only example of a particular certificate. Sometimes you will see a hand stamp on the certificate that says "Do not remove from file". Specimens were also used to show prospective clients different types of certificate designs that were available. Specimen certificates are usually much scarcer than issued certificates. In fact, many times they are the only way to get a certificate for a particular company because the issued certificates were redeemed and destroyed. In a few instances, Specimen certificates were made for a company but were never used because a different design was chosen by the company. These certificates are normally stamped "Specimen" or they have small holes spelling the word specimen. Most of the time they don't have a serial number, or they have a serial number of 00000. This is an exciting sector of the hobby that has grown in popularity over the past several years.