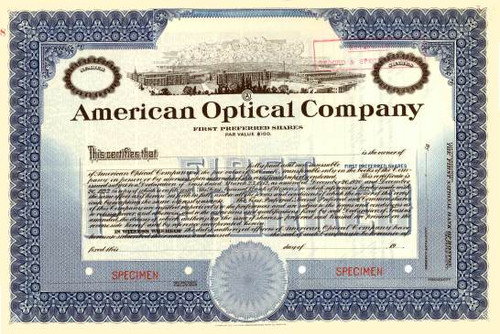 Beautifully engraved SPECIMEN certificate from the American Optical Company. This historic document was printed by the Franklin Lee Devision - American Banknote Company in the 1920's and has an ornate border around it with a vignette of manufacturing facilities.

Certificate Vignette
American Optical is a company that has a heritage of leadership in innovative product design; product quality; in services and in value. From the company's beginnings in Southbridge, Massachusetts in 1833, it has set the standard for the ophthalmic industry. Today, American Optical provides the ophthalmic professional with a range of products that enables them to present eyewear to the consumer in a manner that matches their needs to modern living, to a selection of lens designs, lens materials and material technology and lens coatings - all at outstanding value. American Optical was established in 1833 as a small spectacle manufacturing concern in Southbridge, Massachusetts. The company grew rapidly, gradually acquiring additional facilities for manufacturing a range of optical products. In 1935 this expansion lead to its purchasing the Spencer Lens Company of Buffalo, New York (see below). For several years after the acquisition the Spencer Lens Company continued operation under its own name before becoming known as the Instrument Division of American Optical Company in 1945. (The 1940 BKH catalog lists Spencer microscopes and shows the Spencer logo in its illustrations. By 1950 the Adolph Frese Co. catalog still lists Spencer microscopes, but the illustrations now show the AO Spencer logo.) In 1982 Reichert partnered with AO, by that time a part of the Warner-Lambert Group. The partnership used the name Reichert-Jung. They were bought by Cambridge Instruments in 1986, which then purchased Bausch & Lomb's optical systems division in 1987 (moving it to the former Spencer works in Buffalo), using the name Cambridge instruments. Cambridge Instruments merged with Wild-Leitz in 1990 to form Leica plc. Stereo microscopes continued to be manufactured at the former Spencer works in Buffalo, sold first under the Cambridge and then the Leica brand. Charles Spencer was the first American to successfully make microscopes in the U.S.A., publishing his first catalog in 1838. In 1865 he began operating as C. A. Spencer and Sons. In 1873 Spencer and his sons moved from the original shop in Canastota, New York to Geneva, New York. After Charles death in 1881 the business was carried on by his son Herbert, who, after a time moved to Cleveland, Ohio, and then, in 1890, to Buffalo, New York, where the company remained. For a short time, between 1890 and 1895 the company became known as Spencer and Smith. The Spencer Company was incorporated in 1895, using the name Spencer Lens Company up into the 1940's. Spencer remained the only microscope manufacturing firm in America until 1849. By 1880 it had been joined by 19 others, including Bausch & Lomb, but by 1903, Spencer and B&L were the only two remaining American firms making microscopes. According to the 1920 Catalog of Spencer Microscopes Microtomes and Accessories the Spencer Lens Co. manufactured high grade optical glass, photographic lenses and projection apparatus (under the trade name "Delineascopes") in addition to microscopes, microtomes and microscope accessories. Between 1920 and 1922 Spencer introduced a line of instruments including spectrometers, Abbe and hand refractometers, and a goniometer. The 1953 American Optical Company Instrument Division catalog listed a variety of products, with microscopes predominating. There were six sections on microscopes: Laboratory, Special Purpose, Research, Stereoscopic, Polarizing, and Metalugical, with an additional four related sections covering: microscope accessories, illuminators, photomicrographic cameras, and microtomes. Four remaining catalog sections covered: Hematological Equipment (hemacytometers and hemoglobinometers), Optical Measuring Instruments (colorimeters, refractometers, spectroscopes, spectrophotometers), Miscellaneous Instruments (colony counters, sterile fluid pumps, scratch hardness testers, microform readers), and Custom Built Instruments. References: Anonymous. "Introducing AO...Pioneers in Precision," American Optical Company Scientific Instruments Catalog. Buffalo. (1953) pp 6-7. Bracegirdle, Brian. Notes on Modern Microscope Manufacturers. Quekett Microscopical Club, Oxford (1996). Turner, Gerard L'E. The Great Age of the Microscope. Adam Hilger, Bristol and New York. (1989). Robert A. Paselk Scientific Instrument Museum