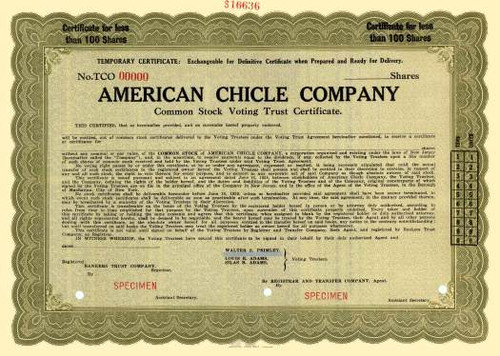 Beautifully engraved SPECIMEN certificate from the American Chicle Company. This historic document was printed by the American Banknote Company in 1925 and has an ornate border around it. This item is over 79 years old. In 1899 the leading gum manufacturers organized themselves into the American Chicle Company. William White became president and Thomas Adams Jr. was chairman of the board of directors. Other gum makers in the organization included Beeman, Primley and S.T. Britten. This company was eventually purchased by the Warner-Lambert Company, which is now part of Pfizer.