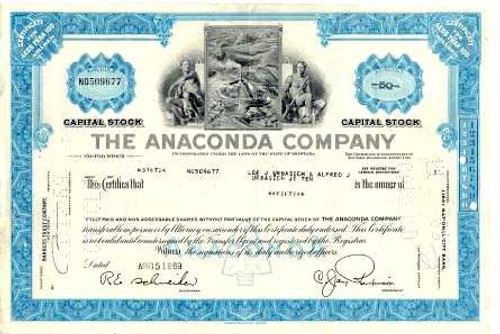 Beautifully engraved certificate from the Anaconda Company issued no later than 1975. This historic document was printed by American Bank Note Company and has an ornate border around it with a vignette of two allegorical men on the sides of a large mine and mill area and their is an underprint of an arrowhead on the bottom. This item has the printed signatures of the Company's President and Secretary and is over 35 years old. 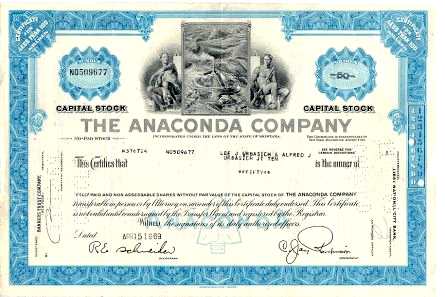 Certificate Vignette
Anaconda Mining Company incorporated 1892; in 1895 renamed Anaconda Copper Mining Company; in 1955 reorganized as Anaconda Company; sold to Atlantic Richfield Co., 1979, and operations shut down in 1983; engaged in mining, smelting, and refining of copper, lead, zinc, and other ores, with subsidiaries in mining, lumber, coal, foundry, and other industries; headquartered in Anaconda, Montana, with major mines in Butte, Montana Area.