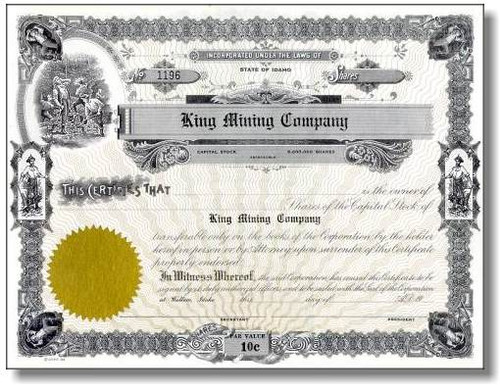 Beautifully engraved unissued Certificate from the King Mining Company . This historic document has an ornate border around it with a vignettes of six mining scenes. This item is over 50 years old. On August 24, 1943, the King Mining Company was formed, consolidating fifteen properties north of Mullan and east of Burke, Idaho. These properties included 176 patented claims -- encompassing 3177 acres, three mill sites, thirty-five unpatented claims, and a sixteen acre tract of land. John Wourms chaired of the meeting and Wallace Sanford kept the minutes. Attending were Roy W. Anno, Henry Buhrmester, and H.V. Kiebert. Anno nominated the others to act as the first official members of the board. Following the incorporation meeting, the first board meeting was held to elect officers. Anno was named president; Kiebert, vice-president; Sanford, secretary-treasurer; Paul Jessup, Comptroller, and Wourms, attorney. The company, according to the minutes (p. 11), "...was organized for the purpose of acquiring a group of mining claims or properties in Lelande and Hunter Mining Districts, owned by various corporations, and that under the plan of reorganization, shares would be issued for the purpose of these concerns in the following amounts:" Company to whom No. of Claims No. of King stock issued: for which issued: shares issued: Marsh Group 9 266,667 East Hecla 4 40,000 Missoula Copper 10 50,000 Copper King 18 268,000 Homestake 5 50,000 Hercules 53 560,000 Liquidator 13 100,000 Imperial 10 142,439 Sonora 11 166,569 National Copper 16 163,193 Gertie 3 75,000 At the next meeting, held March 1, 1945, new directors were elected. These included, Henry Day, F.M. Rothrock, and W.N. Sanford. R.W. Anno was elected president and Henry Buhrmester, vice-president. The board meeting followed: Henry Day was elected president and manager, and F.M. Rothrock vice-president. The only other order of business was accepting a $3,000 loan from the Hercules to pay-off the company's liabilities. At the final meeting of the Directors, on June 18, 1947, the decision was made to consolidate King Mining Company with the Hercules and ten other companies, creating Day Mines Incorporated.