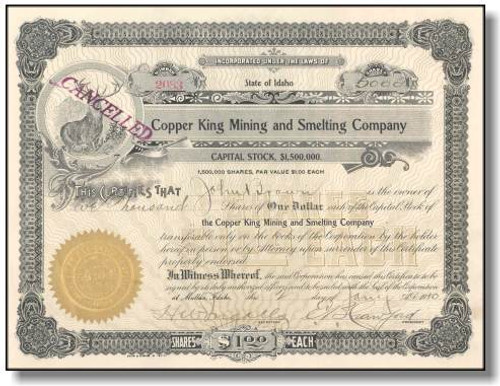 Beautifully engraved Certificate from the famous Copper King Mining and Smelting Company issued in 1910. This historic document has an ornate border around it with a vignette of a Buck Deer . This item is hand signed by the company's president and is over 90 years old. The Copper King Mining and Smelting Company was incorporated on 13 August 1901. Its mine was located in the Lelande and Hunter Mining District in Shoshone County, Idaho, near the head of Deadman Creek, about four miles from the town of Mullan. Copper King's Board of Directors changed often, but most of the business was transacted by H.W. Ingalls, secretary. In 1930 the company was sold to E.H. and W.B. Heitfeld, David Smith, F.M. Rothrock, and Henry L. Day, who became the mine manager. Jerome Day was also a company officer until his death in 1941. Little ore ever came out of the Copper King, though reports to the stockholders were consistently optimistic: Something big lay just ahead and, with another assessment, would be revealed in the next phase of development. During 1917 the directors claimed that the main ore body had been found but the mine was not yet self-sustaining. The same year the board proposed construction of a small milling plant for the site; but abandoned the idea when cost estimates doubled. Work stopped for nine months in 1918-1919 because of the war, and the 1920 report to the stockholders confessed that exploration and overall ore production had been disappointing. Still, the board requested another assessment, and further assessments were levied throughout the 1920s. Finally, in 1933, development efforts ceased and all of the mine's machinery was removed for storage at the Hercules Mill. In 1941 the Board briefly entertained the idea of putting the mine back into operation. Instead, in November 1943, Copper King stock was exchanged one share for three of King Mining Company.