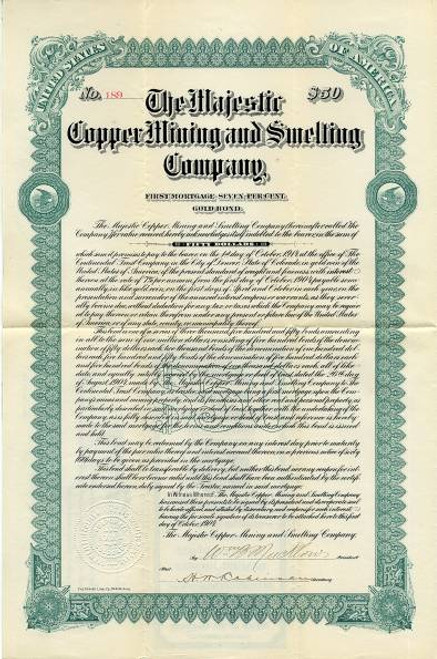 Beautiful uncancelled Bond Certificate from the Majestic Copper Mining and Smelting Company issued in 1904. This historic document was printed by the Denver Lithograph Company and has an ornate border around it with the company name centered on top. This item has the signatures of the Company's President, William B. Mucklow and Secretary, and is over 105 years old.

Certificate Vignette
Copper Handbook 1906 MAJESTIC COPPER CO. UTAH. Office: care of Schirmer, Chapin & Emmons, Boston, Mass. Mine office: Milford, Beaver Co., Utah. Wm. B. Mucklow, president; E. E. Abercrombie, managing director; J. A. Ingols, superintendent. Employs circa 50 men. Organized August, 1904, as successor of Majestic Copper Mining & Smelting Co., with capitalization 400,000 shares; bonds, $200,000. Old company, organized 1900, became insolvent April, 1904, and paid 60 cents on the dollar. Present management took charge facing an indebtedness of $300,000, without treasury stock or credit, but with Samuel Newhouse as managing director, succeeded in rehabilitating the property. Lands, 120 claims, area 2,450 acres, also an SO-acre smelter site and 1,100 acres miscellaneous lands, in 8 groups, located in 5 districts of Beaver county, Utah, showing about 100 ore bodies, in 20 or more different groups of mines and prospects. In addition to copper the ores carry gold, silver, platinum, lead, cobalt, bismuth, vanadium and uranium. Copper ores include all of the principal oxides, carbonates and sulphides, also occasional native copper, and many of the rarer copper minerals, ores ranging from 2% to 85% copper, with estimated average values of 12% copper, 12 oz. silver and $3 gold per ton, v.->'t h large percentages of lead, but these figures, made by the former "boom ' management, are much too high. There are 18 shafts, of 1007 to 400' depth, also many tunnels and innumerable test-pits, with circa 6 miles of workings. Former management estimated 1,000,000 tons of ore in sight, with 500,000 tons blocked out for stoping, but these estimates were gross exaggerations, and must have been known to be such when put forth, while .stock was being fed to the public. Some of the properties were worked formerly for silver, but the silver-copper ores at and near surface gave way to copper-silver ores at depth, all ores being more or less auriferous. The O. K. is the principal mine of the company. Selected shipments of 1,145 tons of O. K. ore gave net returns of 895,000, a shipment of 258 tons in 1901 giving smelter returns of 40% copper, 7.5 oz. silver and $3.80 gold per ton. The O. K. group has 7 claims, opened by a 3-compartment main shaft of 400*, showing a vein ranging up to 28' width, with considerable development on the 300* and 400' levels. Also has an undeveloped ore body apparently about 250' wide, which is a stockwerk, with stringers carrying high-grade ores. The O. K. has considerable ore blocked out, mainly by the present management. The Old Hickory group, 9 claims, with a gossan capping circa 250* wide, above a vein of 40' to 200* width, is opened by a short tunnel and by about 60 pits and shafts, deepest 212', showing ores carrying 4% to 5% copper, with gold and silver values estimated at $2 to $4 per ton. Equipment includes a 34-h. p. Fairbanks-Morse electric hoist, Ingersoll-Sergeant air-compressor and Rand rock drills. The Harrington-Hickory group, 25 full and fractional claims, has two 40V shafts and circa 40 pits and shallow shafts showing ore. Main shaft has 3 compartments. This group shows numerous fissure veins intersected by cross-veins, both approximately vertical, and in addition has a series of bedded veins dipping at 30° to 35°, giving three separate intersecting systems of ore bodies. Principal values are in lead, ores giving assays of 2% to 3% copper, 25% to 50% lead and up to 50 oz. silver and SI gold per ton. The Vicksburg group, 4 claims, formerly mined for gold, shows three 2' to 20* vertical fissures, with mineralized cross-veins, opened by numerous shallow pits and shafts, with a 2-compartment working shaft. The Hoosier Boy group, 10 claims, has a 250' vertical shaft, in limestone, showing auriferous and argentiferous copper-lead ores. The Larkspur group, 8 claims, shows a CO7 contact vein between granite and limestone, carrying irregular bunches of high-grade ore. The Copperfield group, 17 undeveloped claims, lies between the O. K. and the Old Hickory mines. The Apex group, 4 claims, adjoins the Old Hickory, and there also is an undeveloped group, known as the Ben Harrison. The mine has steam, gasoline and electric power, and an undeveloped water power on Beaver river, 35 miles distant, is believed to be capable of generating about 2,000 h. p., and transmitting same electrically to the mine and smelter, at a cost of about $100,000. The reduction works, at Lewisville, 3 to 8 miles from the various mines, built by the Colorado Iron Works Co., includes a sampling mill and smelter with a 250-ton copper furnace and a 100-ton lead furnace, with Nesmith hot-blast stoves that heat the blast to 800° Fahrenheit, before entering the tuyeres. The smelter building is of steel frame, on stone foundations, and is large enough to accommodate four 250-ton furnaces, with necessary machinery. The townsite of Lewisville was platted by the company. The mines and smelter are served by the Oregon Short Line railway. The building of a concentrator at the O. K. mine has been considered. On a test run, 1905, under the honest and capable management of Mr. Newhouse, ores gave average returns of 5.1% copper, 3.8 oz. silver and $1.20 gold per ton. This shows how misleading were the smelter shipments and estimates of the former management. Ore is being sent to the Newhouse mill, and, in June, 1906, it was planned to ship 3 tons of concentrates weekly to the Murray smelter, in preference to blowing in the company's own smelter on an inadequate tonnage. The smelter ran for 40 days only, under the previous management, giving only half the claimed duty, and smelted only 5,000 tons of the 500,000 tons claimed to be blocked out for sloping at that time, when it ran out of ore and closed down. The former fiscal agents were Chapman, Mucklow & Bosson, of which firm the present president was a member. This firm is said to have received 40% commission on stock sales. Senator A. B. Lewis also was connected with the promotion. Under competent management the Majestic should make a good mine, in time, and the work of the new company seems to have been done sensibly and economically. MAJESTIC COPPER MINING & SMELTING CO. UTAH.