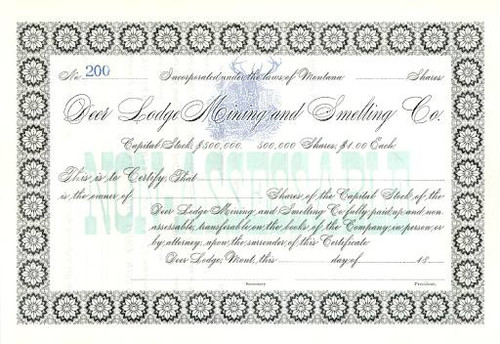 Beautifully engraved unissued Certificate from the famous Deer Lodge Mining and Smelting Company dated 18__. This historic document has an ornate border around it with a underprint vignette of a deer. This item is over 110 years old. The largest city in Deer Lodge County, Montana is Anaconda, named after the famous mining company. Below is an article from High Country News -- September 05, 1994 (Vol. 26 No. 16) Busted town pursues industrial recreation ANACONDA, Mont. - Can famous golfer Jack Nicklaus reverse the sagging fortunes of this crumbling smeltertown by building a golf course on top of a hazardous waste site? The company that owns the site, Arco, is betting $10 million that he can (HCN, 11/29/93). "Some people will say I lost my marbles," Nicklaus told Anacondans in late May when he broke ground for the new course. "But I think when we're done you'll be very proud of it." In 1980, the last copper smelting ended, leaving behind a giant smokestack, thousands of unemployed smelter workers and a landscape strewn with a century's worth of hazardous waste. Rather than simply reclaim the land and fence it off, as is usually done, Arco and the Environmental Protection Agency agreed to put the tailings to use. Arco proposed a golf course. It is not a run-of-the-mill Nicklaus course. The $10 million tourist attraction "will have an industrial smelting theme," says Bill Finnegan, who is president of the Old Works Golf Course Authority, an independent entity created by Anaconda-Deer Lodge County. Some of the greens will sit on top of heap roast piles - mounds of charred rock that were set afire decades ago to reduce ore into copper. Sand traps will actually be slag traps, with black, granulated mining waste used in lieu of light-colored sand. The slag will come from a mammoth pile of coal-colored residue left over from the days when the giant smelter complex refined ore into copper. "It's better than the best sand that we've been able to find in the Ohio Valley," said Jon Scott, who works for Nicklaus' firm, Golden Bear Corp. The huge brick stack from the smelter, meanwhile, towers over town and course. The industrial theme carries over in other ways. Trains will take golfers to the course, but they may have to wait while other trains pass carrying processed slag from a nearby factory. Many Anacondans are looking forward to their town's reincarnation as a tourist spot. Finnegan, who doesn't golf, thinks the fact the course sits atop a Superfund site won't keep golfers away. "The words 'toxic waste' bother me a lot, because of what it implies," he says. "It is not a Love Canal kind of thing." The site's biggest problem is high levels of arsenic in the soil from smelting. Remedial workers will cap the tainted soil with two inches of limestone. Dirt will be spread on top of that and grass planted. Hot spots, where toxic levels on the course are high, will be out-of-bounds. "It's safe," says Charlie Coleman, EPA project manager for the site. Building a golf course on a Superfund site, he says, is part of a trend toward using reclaimed land, rather just than fencing it off. "You can't just pick this volume of waste up and move it somewhere, it's too expensive," he says. "Our goal is to make these properties useful." Anaconda is nestled in a mountain valley nearly a mile in altitude, at the headwaters of Warm Springs Creek. Mining magnate Marcus Daly, who found copper at Butte, beneath the "richest hill on earth," came to this site in 1885 and laid out a town to serve what was then a state-of-the-art smelter. Fumes from the smelter have denuded hills behind the proposed course. The course will sit on the edge of town, sandwiched between Cedar Park Homes, a World War II era housing project, and the Cedar Lane bowling alley, a cinderblock building that sports a hand-painted picture of a bowling ball chasing pins. With the grass requiring a year to grow, the Old Works course is scheduled to open in the spring of 1996. Greens fees are expected to be about $25 for 18 holes. As white-shoed golfers replace workers capping and removing waste, boosters hope the post-industrial course will serve as a magnet for new businesses. Already, says Finnegan, who is also vice president at the Bank of Montana, representatives from a hotel, a restaurant and other businesses have called about the possibility of building near the course. The course itself is expected to create 30 to 50 jobs, 80 percent of them part-time. The economic route Anaconda is pursuing may symbolize change in the West. As traditional resource industries diminish, towns are hoping to cash in on the booming tourist business. Anaconda needs a ray of light. The population of Deer Lodge County, of which Anaconda is the largest city, has dropped from a peak of almost 19,000 people in 1960 to 10,000 today. Numerous historic brick buildings, gems from the 1800s, sit boarded up and abandoned. Skeptics doubt whether Anaconda can change from smelter town to tourist town. Not only are there 10 small Superfund tracts in and around Anaconda, but the region, which includes Butte, is the largest Superfund complex in the country. The other drawback is high altitude and notorious winters. In a good year, there may be just four or five months of golfing. Some people also question whether the course can earn enough to cover the projected $500,000 a year in operating fees. And while officials from Arco say the course is a good way for the town to establish a new economy, some see it as a way for ARCO to avoid a more expensive clean-up. "It's sleight of hand," said Bruce Farling, the executive director of Montana Trout Unlimited, who has spent years tracking the clean-up efforts in the area. "They don't have to do soil removal, they cap it. They don't have to worry about cleaning groundwater. It's absurd."