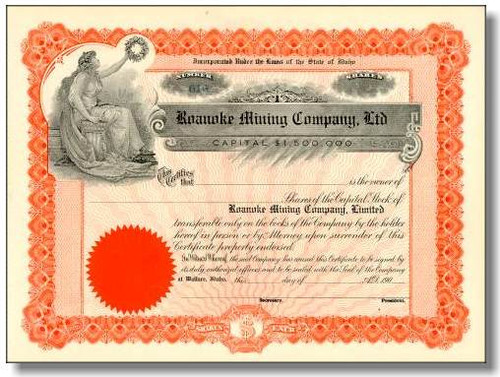 Beautifully engraved unissued Certificate from the Roanoke Mining Company . This historic document has an ornate border around it with a vignette of a woman holding up a wreath. The Roanoke Mining Company, Ltd., incorporated in 1907, had holdings in the Yreka Mining District, Shoshone County, Idaho. These properties were: the Dooley, Dooley #2, Dooley #3, Picket, Picket #2, Roanoke and Roan Oak #2 lodes. The corporation intended to extract commercially viable ores, chiefly lead and silver, from its seven claims. In January 1907, the ten founders of Roanoke called the first stockholders meeting, held at the office of H.P. Knight in Wallace. The board of directors elected at that time were James F. McCarthy, president; Alfred Page, vice-president; W.D. Greenough, secretary; G.W. Ruggles, treasurer; and J.R. Smith. By-laws were adopted and stock certificates issued. Each of the ten founders of Roanoke received 100,000 shares of the company's 1,500,000 shares of capital stock, valued at $1.00 per share. Minutes and related records from 1907-1912 were reported lost or destroyed; apparently saved those of the October 23, 1908 and April 15, 1911 special meetings. Meetings were primarily devoted to the election of officers and levying the nine assessments the corporation required to meet expenses and develop the mines. The first assessment was levied in 1908; others followed in 1913, 1918, 1920, 1927 and 1928, with the final assessment levied in 1936. Little progress was made in the Roanoke mines over the thirty-year life of the company. In 1925 the company was reinstated, after a four years of inactivity. Sometime between 1921 and 1925 the original by-laws and early records had been lost. New by-laws, noting the lack of earlier records, were adopted after the corporation's resurrection. The company had for some time been trying to interest "any responsible concern" in taking the property over, on a basis satisfactory to the stockholders. In 1926 the Day family gained the controlling interest in Roanoke; the majority stock was held in Hercules' name. The following year Henry L. Day was elected president of the corporation, an office he held until the dissolution of Roanoke in 1937. In 1926-1927, the time of greatest activity in Roanoke's history, development expenditures were over $13,000. The tunnels had been caved and in disrepair, requiring considerable work to clear and explore the mines. After 1927, nothing more was spent on development. A lease was granted to C.E. Plumtree in 1928, followed by a $1,500 loan. Plumtree's default resulted in Roanoke's final assessment in 1936 to cover expenses related to foreclosure on Plumtree's homestead. The mine proved so unproductive from 1932 to 1937 that Roanoke was unable to pay its bills, though expenditures were nominal. Finally, in 1937, Roanoke's board of directors (H.L. Day, F.M. Rothrock, W.B. Heitfeld, S.F. Heitfeld, and Herman Rossi) dissolved the corporation and conveyed its property to Hercules Mining Company, the majority stockholder with 1,114,750 shares.