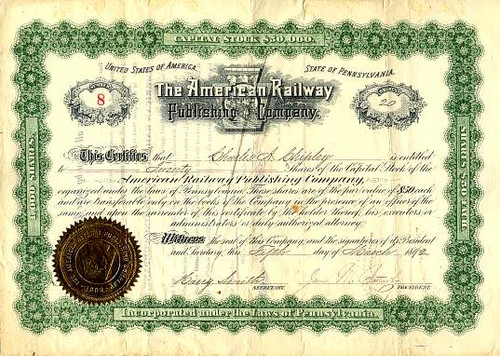 Beautifully engraved certificate from the American Railway Publishing Company issued in 1892. This historic document has an ornate border around it with a vignette of company's name with a train in the backround. This item is hand signed by the Company's President (James M. ??) and Secretary (Barry Smith) and is over 114 years old.

Certificate Vignette
The American Railway Publishing Company, had three magazines: Power, American Journal of Railway Appliances, and Street Railway Journal. An early addition to the staff was James H. McGraw, the founder of The McGraw-Hill Companies, who had been a pupil of Swetland's when he taught school in Panama, New York. McGraw's name first appeared on the masthead in the September 1885 issue of Power as "Advertising Manager, New England District." October 1886 found the young company on Liberty Street in New York City, but debts had piled up until liabilities exceeded assets by a thousand dollars, and the paper supplier was threatening suit. Both partners had used all of the money they could raise. McGraw was sent for in the emergency, and was able to borrow a thousand dollars from his old friend James Knapp, a rich farmer, of Panama, New York, offering no other security than his good name and insurance policy of which Knapp was made beneficiary. That was McGraw's first stake in the publishing field. A series of ownership changes took place in 1888. By the end of that year, Harris was publishing Street Railway Journal, Swetland Power, and McGraw American Journal of Railway Appliances. In 1889, McGraw laid the foundation for the McGraw Publishing Company by purchasing Street Railway Journal. For some years, Swetland published Power as an individual, but in April 1892, he incorporated the Power Publishing Company, with himself as president and general manager.