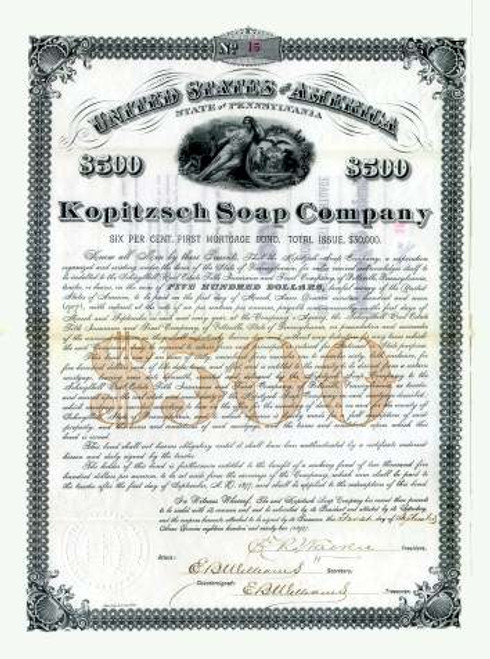 Beautifully engraved certificate from the Kopitzsch Soap Company issued in 1892. This historic document has an ornate border around it with a vignette of an allegorical woman with a bare brest leaning on the state coat of arms. This item is hand signed by the company's president ( E. R. Wainu), secretary and treasurer (E. B. Williams) and is over 108 years old. There are 30 unused coupons attached to the side of this certificate. Early soap companies are very scarce and highly desirable. 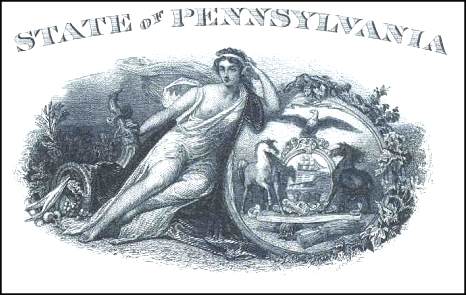 Certificate Vignette
The following was written in 1881: Charles F. Kopitzsch was born in Neustadt-on-the-Osla, Saxony Weimar, Germany, April 5th, 1820. His parents were John Michael and Johanna Kopitzsch. In 1842 he came to America for the first time, and he has since twice visited his native country, having crossed the ocean five times. April 5th, 1845, he was married, and he has been the father of twelve children, six of whom are living. In 1843 Mr. Kopitzsch came to Pottsville, and bought of William F. Redlick a small soap and candle factory on Callowhill street, near Railroad, and engaged somewhat extensively in the manufacture of candles. In 1848 this establishment was burned and Mr. Kopitzsch bought of Jacob Kohler a livery stable on race street, between Second and Third streets, which soon gave way to a soap factory, where he greatly increased his business. In 1873 his factory was destroyed by fire, but he immediately bought all of the surrounding lots and built the large three-story brick building which he has since occupied. It has a frontage of 75 feet on Third street, and extends 150 feet back to an alley, and contains all of the latest improvements in soap-making, including three large soap kettles, two of which have a capacity of 35,000 pounds and the third a capacity of 20,000 pounds, together with several smaller kettles for manufacturing toilet and cold-made soaps; Hersey Brothers' steam-power and Dapp's soap presses, with steam-power soap pump, crutching machines, etc., and a steam- power printing press for printing labels and wrappers. The old factory was repaired and fitted up as a store-room and warehouse, and on other lots Mr. Kopitzsch erected three large brick dwell- ing houses. The capacity of the works is about 2,500,000 pounds annually, and they give employment to fifteen hands. The factory is arranged with great convenience, and is heated by steam, rendering all parts of it comfortable in the coldest weather. Among the several kinds of soap manufactured may be mentioned the following brands" "Ocean," "Miners' Favorite," "New Wrinkle," "White Extra Family," "Monarch," "Economical," "Powdered Borax," "Castile," and "Variegated." These and other less prominent brands embrace all kinds of laundry, family, scrubbing and toilet soaps. Always an energetic and active business man, Mr. Ko- pitzcsch has spared neither pains nor expense in producing the best and most stylish of soaps. He has studied closely the wants of the miners and iron workers in perfecting soaps which answer their purposes and yet be so cheap as to be saleable at a price that will not seem exorbitant to them, in which he has succeeded better than any other manufacturer. As a citizen he is prominent and respected. In all local improvements he has aided with his means and influence, and his business is creditable alike to himself and the place where it is located. SCHUYLKILL COUNTY STEAM SOAP AND CANDLE WORKS. This industry, which was established in 1844, by Charles F. Kopitzsch, has come to be an important and profitable manufactur- ing business. The famous brand of "Ocean Soap" is made here; and a score of others, each favorable known in the trade, together with his various brands of wax, sperm and adamantine candles, have made the name of this enterprising German known as widely as that of any manufacturer in Schuylkill county. The present factory buildings were erected in 1878. This history came from the HISTORY OF SCHUYLKILL COUNTY, PA with Illustrations and Biographical Sketches of Some of Its Prominent Men and Pioneers. New York: W. W. Munsell & Co., 36 Vesey Street, 1881 - Press of George Macnamara, 36 Vesey Street, N.Y.