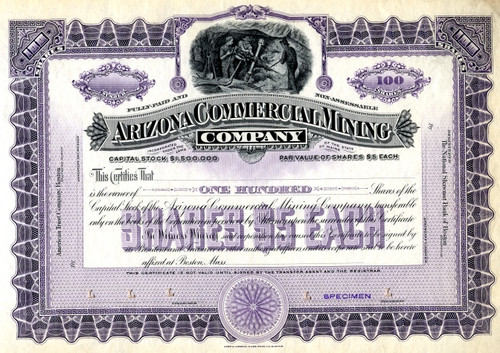 Beautifully engraved certificate from the Arizona Commerical Mining Company. This historic document was printed by the John A. Lowell Banknote Company and has an ornate border around it with a vignette of a men working in a mine with modern tools. 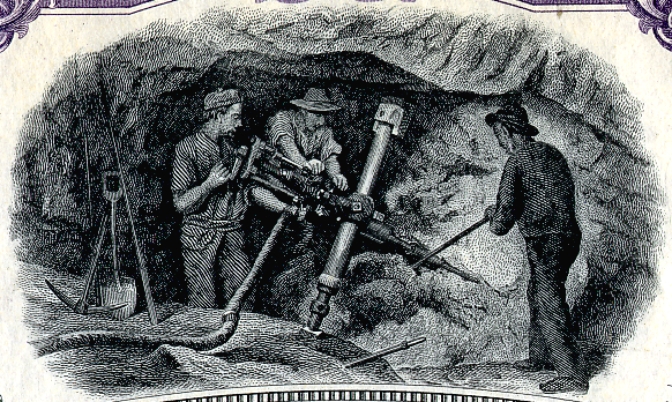 Certificate Vignette
On January, 1905, the Arizona Commercial Copper Co. was formed to develop these two groups of claims, developing the Arizona Commercial Mine by consolidation of the Copper Hill group, previously owned by the Arizona Commercial Co., and the workings (Black Hawk shaft) on the Eureka group, previously developed by the Matamora Co. Operations ceased late in 1910 due to the financial failure of N.L. Armster, President of the company. The company reorganized as the Arizona Commercial Mining Co. The mine was reopened in February, 1912. The first work was limited to the 800 level of the Copper Hill shaft. Later the shaft was deepened, and development of lower levels continued. The first ore was found by a drift driven northeast of the shaft on the 1200 level. The mine produced continuously until 1930 when all known reserves were exhausted and the mine was closed. The property was sold to the Old Dominion Co. a few months later and was acquired by Miami Copper Co. in 1940, along with other properties of the Old Dominion Co. From 1906 to 1930, the two Arizona Commercial companies produced about 92,000,000 pounds of Copper, 17,000 oz. Gold, and 580,000 oz. Silver. History from Encyberpedia and OldCompany.com (old stock certificate research service)