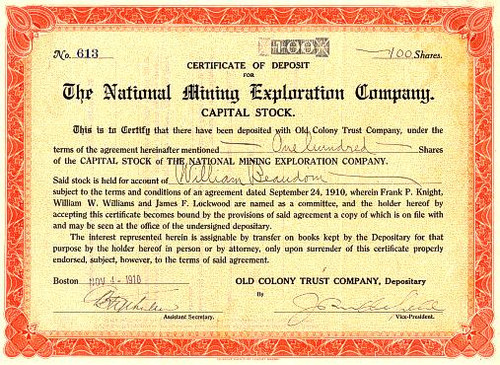 Beautifully engraved Certificate of Deposit from the National Mining Exploration Company issued in 1910. This historic document was printed by the American Banknote Company and has an ornate border around it. This item is hand signed by the Company's officers and is over 95 years old. The company started with three different groups claims. The Iron Cap at Globe, Gila County, the Fumarole group at Safford, Graham County and the Copper Ridge group at Kelvin, Pinal County. Development concentrated on the Iron Cap properties. The directors offered bonds to the stockholders in an attempt to raise $250,000 in capital. The stockholders withheld purchases and a $100,000 note was called in by promoters. The company paid all debts and reorganized as the Iron Cap Copper Co which continued to develop and mine the Iron Cap group at Globe and the Fumarole group at Safford. (Copper Handbook, 1908, p.1011; 1910, p.1255; 1912; p.479).