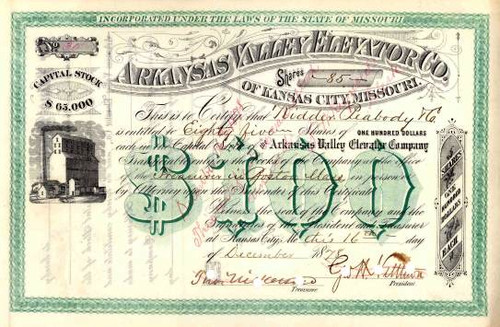 Beautifully engraved certificate from the Arkansas Valley Elevator Company issued in 1878. This historic document has an ornate border around it with a vignette of a building. This item is hand signed by the company's president (George H. Nettleton)and treasurer and is over 127 years old. 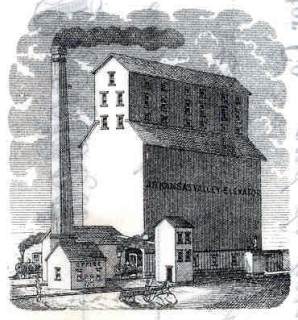 Certificate Vignette
George H. Nettleton, son of Alpheus and Deborah Nettleton was born in Chicoppee Falls, Massachusetts on November 15, 1851. He attended public schools until he was 18 and then studied a Rennselaer Polytechnic Institute for one year. He felt his parents were unable to educate him further, so he secured employnent as an ax man on the New Haven and New London Railroad for $1.00 per day. From this humble beginning Nettleton advanced to rodman, draughtsman and leveler. Later he was appointed one of the division engineers for the Terre Haute and Alton Railroad, and by 1857 he was resident engineer on the Wabash. In 1860, Nettleton was detailed to make a survey of the road from Kansas City to Cameron, Missouri. During the Civil War his entire working force was organized and armed as militia, and Nettleton served as commander of one of the companies, stationed at Hannibal MO. In 1865 he was appointed assistant superintendent of the Hannibal and St Joeseph Railroad and became chief engineer in 1869. He was also the engineer in charge of the railroad bridge over the Mississippi River at Quincy, Illinois. In 1872 he became general superintendent of the Atchison, Topeka, and Sante Fe Railroad and moved to Topeka, Kansas. In 1874 he was placed in charge of the Joy Lines and was general manager of the Kansas City, St Joeseph and Council Bluff, and the Atchison and Nebraska. In 1875 he moved to Kansas City, Missouri and became general manager of the Kansas City stock yards, president of the Arkansas Valley Elevator Company and manager of the Union Depot. By 1878 Nettleton became the western representative of a wealthy group of New England capitalists. This fact made development of a railroad through the hill country possible.