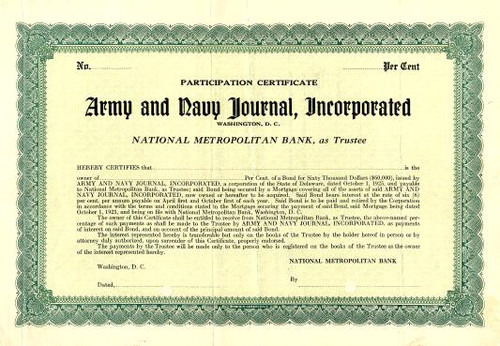 Beautifully engraved specimen certificate from the Army and Navy Journal, Incorporated dated 1925. This historic document has an ornate border around it with the company's name on top center. This item is over 81 years old. Folds from storage in envelope. John Callan O'Laughlin (1873-1949) was a journalist and long-time publisher of the Army and Navy Journal with important connections to the political and military establishment in Washington from 1920 until his death. These connections informed O'Laughlin's writing on foreign and military policy. O'Laughlin became a trusted friend of Herbert Hoover, writing lengthy, insightful letters to him on politics and world affairs. In fact, Hoover relied on O'Laughlin for information and advice, especially after his presidency. O'Laughlin began his career as a journalist, writing for the Washington bureau of the New York Herald from 1893 to 1902. After a short stint on the AP European staff, O'Laughlin worked for the Chicago Tribune and later the Chicago Herald until World War I. In January 1918 he was commissioned a major in the U.S. Army, serving as aide to Major General Goethals. During these years, O'Laughlin wrote his first book, From the Jungle through Europe with Roosevelt (1910). After the war, O'Laughlin established the Army and Navy Journal, a weekly covering the American Military and world affairs. O'Laughlin's political connections extended from Theodore Roosevelt to Harry Truman, and covered the philosophical spectrum from Herbert Hoover to Eleanor Roosevelt. He was a delegate at Roosevelt's Bull Moose convention in 1912, and later served on the Republican National Committee. After World War II, Hoover hoped to influence the European Recovery Program using O'Laughlin as his agent. These hopes went largely unfulfilled a Marshall and Truman went their own way in shaping post-war Europe. O'Laughlin died March 14, 1949. He is buried in Arlington National Cemetery. An extensive collection of his papers is held by the Library of Congress. For more information see: Who's Who in America, 1945-1950, p. 404 and Gary Dean Best's Herbert Hoover: The Post-Presidential Years, pp. 302-324. About Specimen Certificates Specimen Certificates are actual certificates that have never been issued. They were usually kept by the printers in their permanent archives as their only example of a particular certificate. Sometimes you will see a hand stamp on the certificate that says "Do not remove from file". Specimens were also used to show prospective clients different types of certificate designs that were available. Specimen certificates are usually much scarcer than issued certificates. In fact, many times they are the only way to get a certificate for a particular company because the issued certificates were redeemed and destroyed. In a few instances, Specimen certificates were made for a company but were never used because a different design was chosen by the company. These certificates are normally stamped "Specimen" or they have small holes spelling the word specimen. Most of the time they don't have a serial number, or they have a serial number of 00000. This is an exciting sector of the hobby that has grown in popularity over the past several years.