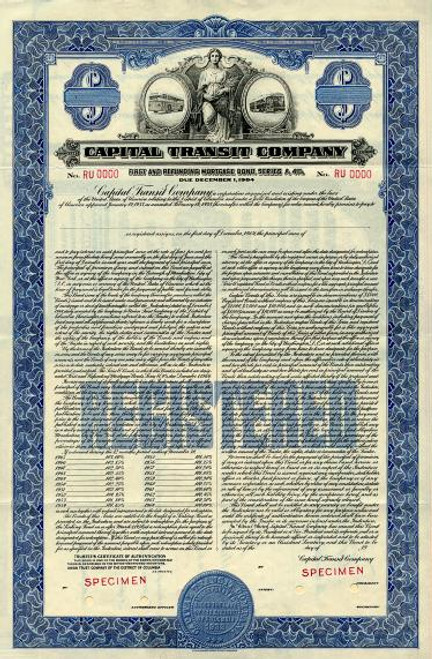 Beautifully engraved specimen certificate from Capital Transit Company printed in 1944. This historic document was printed by Columbian Bank Note Company and has an ornate border around it with a vignette of an allegorical women flanked by two buses. This item is over 62 years old.

Certificate Vignette
Capital Transit (19331956) In December 1933, the Washington Railway and Electric Company merged with Capital Traction forming the Capital Transit Company. For the first time, all street railways in the Washington were under the same management. On 28 August 1937, the first PCC streetcar entered service in Washington on 14th Street. Over the next two years, all cars would be replaced by the PCC model. On 12 September 1949, Louis Wolfson purchased from North American 45.61% of the company's stock for $20 per share. The sale allowed North American to comply with the Public Utility Holding Company Act of 1935, which prevented North American from owning other businesses along with the Potomac Electric Power Company. This came about after a decision by the United States Supreme Court's in North American Company v. Security and Exchange Commission in 1946. DC Transit (19561973) The former powerplant on the Georgetown waterfrontIn 1956, in response to a carmen's strike, Congress and the District Commissioner revoked Capital Transit's franchise. The franchise was sold to O. Roy Chalk, a New York financier who owned controlling interest in Trans-Caribbean Airways. He purchased the assets of Capital Transit under the corporate title of DC Transit. Part of the agreement was that he would eliminate the streetcars and replace them with buses. The last streetcar ran on 27 January 1962. Most of the cars were sold to Barcelona and Sarajevo. Most of DC Transit's assets were purchased by the Washington Metropolitan Area Transit Authority (WMATA) in 1973. About Specimens Specimen Certificates are actual certificates that have never been issued. They were usually kept by the printers in their permanent archives as their only example of a particular certificate. Sometimes you will see a hand stamp on the certificate that says "Do not remove from file". Specimens were also used to show prospective clients different types of certificate designs that were available. Specimen certificates are usually much scarcer than issued certificates. In fact, many times they are the only way to get a certificate for a particular company because the issued certificates were redeemed and destroyed. In a few instances, Specimen certificates we made for a company but were never used because a different design was chosen by the company. These certificates are normally stamped "Specimen" or they have small holes spelling the word specimen. Most of the time they don't have a serial number, or they have a serial number of 00000. This is an exciting sector of the hobby that grown in popularity over the past several years.