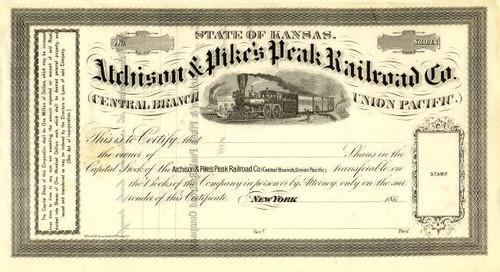 Beautifully engraved certificate from the Atchison & Pike's Peak Railroad Company dated 186X. This historic document was printed by Hatch & Company and has an ornate border around it with a vignette of a train passing by with a few buildings in the background.

Certificate Vignette
CENTRAL BRANCH UNION PACIFIC RAILROAD. The main line of this road extended from Atchison to Waterville, Kan., 100 miles. The Atchison, Colorado & Pacific Branch ran from Waterville to Lenora, 191.9 miles; Greenleaf to Washington, 7 miles; Downs to Bull's City, 23.6 miles; Yuma to Talmage, 29.8 miles; total 252.3 miles. The Atchison, Jewell County & Western road extended from Jamestown to Burr Oak, 38.8 miles. The total length of lines operated by the Central Branch Union Pacific Railroad in June 1, 1882 amounted to 386.1 miles. The original company was organized as the Atchison & Pike's Peak Railroad Company on February 11, 1859; opened to Waterville January 20, 1868. It was provided for as one of the branches in the acts incorporating the Union Pacific Railway Company, and received from the Government 187,608 acres of land, and bonds at the rate of $16,000 per mile for the 100 miles. The road practically belonged to the Union Pacific Railway Company. It was operated by the Missouri Pacific Railway Company, which accounted to the Union Pacific Company for the earnings of the road. As part of the treaty with the KICKAPOO INDIANS in JUNE 28, 1862, in ARTICLE 5: The Kickapoo tribe of Indians, entertaining the opinion that it is the desire of the Government and the people of the United States to extend railroad communication as far west as possible in the shortest possible time, and believing that it will greatly enhance the value of their lands reserved in severalty by having a railroad built, connecting with the eastern railroads running from the city of Atchison, in the State of Kansas, westerly in the direction of the gold mines in Colorado Territory; and entertaining the opinion that the Atchison and Pike's Peak Railroad Company, incorporated by an act of the legislative assembly of the Territory of Kansas, approved February 11, 1859, has advantages for travel and transportation over all other companies, it is therefore provided that the Atchison and Pike's Peak Railroad Company shall have the pri- vilege of buying the remainder of their land within six months after the tracts herein otherwise disposed of shall have been selected and set apart, provided said railroad company purchase the whole of such surplus lands at the rate of one dollar and twenty-five cents per acre; and when the selections shall have been made and assigned as aforesaid, it shall be the duty of the Commissioner of Indian Affairs to notify the president of said railroad company thereof; and if said railroad company signifies its consent to purchase said surplus lands within sixty days thereafter, and shall make, execute, and deliver to the Secretary of the Interior the bonds of the said company in a penal sum equal to double the value of said surplus lands as heretofore ascertained, with the condition that the said bonds shall become void whenever the said company shall comply with the conditions of the treaty, the Secretary of the Interior shall issue to said railroad company certificates of purchase, and such certificates shall be deemed and held in all courts as evidence of the right of possession in said railroad company to all or any part of said lands, unless the same shall be forfeited as hereinafter provided. And if said railroad company make such purchase, it shall be subject to the following considerations, viz: They shall con- struct and fully equip a good and efficient railroad from the city of Atchison, in the State of Kansas, westerly, within six years, and as follows: The first section of fifteen miles of said road to be completed within three years from the date of said purchase, and the second section to a point as far west as the western boundary of said reservation within three years there- after; and no patent or patents shall issue to said company or its assigns for any portion of said lands until the first section of said road-shall be completed, and then for not more than one- half of said lands; and no patent or patents shall issue to said company or its assigns for any of the remaining portion of said lands until said second section of said railroad shall be com- pleted as aforesaid; and before any patents shall issue for any part of said lands, payments shall be made for the lands to be patented at the rate of one dollar and twenty-five cents per acre. And said company shall pay the whole amount of the pur- chase-money for said lands in the securities of the United States to the Secretary of the Interior, in trust for said Kickapoo tribe of Indians, within six years from the date of such pur- chase; and when so paid the president is authorized hereby to issue patents therefor. Said company shall, in like manner, pay to the Secretary of the Interior, in trust as aforesaid, each and every year, until the whole purchase-money shall have been paid, interest from date of purchase, at six per cent. per annum, on all the purchase-money remaining unpaid. Said interest, and the interest due on the purchase-money after it is paid to the United States, shall be held in trust and paid to said Indians on the first day of April of each and every year; and in ten years from the ratification of this treaty there shall be paid by the United States to said tribe of Indians ten thousand dollars, as their first instalment upon the amount of said purchase-money, and ten thousand dollars each and every year thereafter until all is paid.