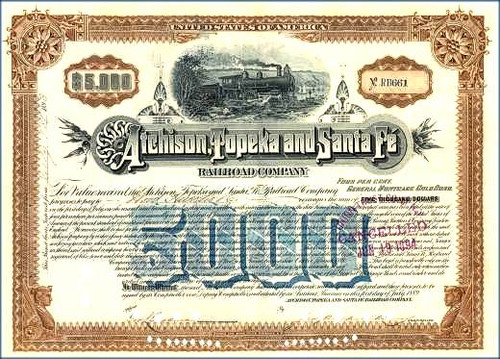 Beautifully engraved SCARCE certificate from the Atchison, Topeka and Santa Fe Railroad Company issued in 1889. This historic document was printed by the Homer Lee Banknote Company and has an ornate border around it with a vignette of a train and an underprint of 5,000. This item is hand signed by the Company's Comptroller and Assistant Treasurer and is over 126 years old. This is an uncommon variety of the ATSF certificates and is in excellent condition. EF+

Certificate Vignette
Originally chartered in January 11, 1859, under the name of Atchison and Topeka Railroad Company, the company changed its name to Atchison, Topeka and Santa Fe Railroad on March 3, 1863. Construction on the railroad began in 1869 and the line from Topeka to the Colorado state line was opened December 23, 1873. The New Mexico Division was opened to Santa Fe on February 16, 1880. During the 1880s, the company merged with a number of smaller branch lines and divisions and built five new extensions. The company also maintained a land department which sold off unused portions of the generous land grant supplied by Congress in the 1860s. In December 1893, the company asked for the appointment of receivers in anticipation of its inability to pay forthcoming financial commitments. J. W. Reinhart, Boston (replaced by Aldace F. Walker in September 1894), J. J. McCook,New York and J. C. Wilson,Topeka were chosen to draw up the plan of reorganization. The railroad defaulted on their loan payments in January 1894. Committees were formed to look after the interests of the bondholders, and in March 1895, company assets were sold to the Atchison, Topeka and Santa Fe Railway System. When the Atchison & Topeka Railroad incorporated in 1859, corporate offices and the majority of the original investors-including the first president, Henry Strong-- resided in Boston, Massachusetts. Over the years, however, new officers were located in New York City and Topeka, Kansas as well as Boston. Eventually, the company maintained offices in those three cities. The financial office remained in Boston with locations at Devenshire Street and later, 95 Milk Street. After the company restructured in 1895, all administrative functions were consolidated and located in Chicago.