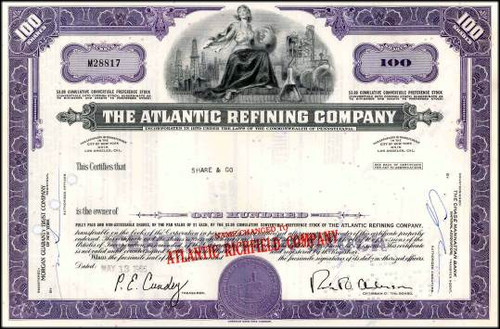 Beautifully engraved certificate from the Atlantic Refining Company issued in 1966. This historic document was printed by the American Banknote Company and has an ornate border around it with a vignette of an allegorical woman holding a globe with an oil refinery in the background. There is an overprint that the company's name was changed to Atlantic Richfield Company ( ARCO ). This item has the printed signatures of the Company's President and Treasuer and is over 40 years old.

Certificate Vignette
Richfield Oil company was based in Los Angeles. Arco had spun off its midwestern and eastern service areas to concentrate on becoming the low-cost leader in the west coast market. Arco was purchased by British Petroleum ( BP ) in 2000.