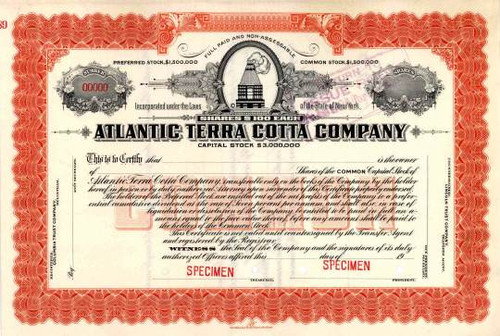 Beautifully engraved RARE SPECIMEN certificate from the Atlantic Terra Cotta Company. This historic document was printed by the Franklin - Lee Banknote Company in 1912 and has an ornate border around it with a vignette of the company's logo. This is the first time we have seen this certificate.

Certificate Vignette
Terra cotta was introduced in the United States by immigrant artisans from England in the mid-19th century. Steel-framed skyscrapers needed decorative, inexpensive and lightweight fire-resistant materials for decoration and protection from the elements. America's terra cotta industry began in Chicago, and the first East Coast facility opened in Perth Amboy in 1879. On Staten Island, terra cotta products were made in the late 1800s on a limited basis. In 1897, the Atlantic Terra Cotta Company formed becoming the sole providers of terra cotta for Manhattan's turn-of-the-century buildings. Island clay was inferior for terra cotta. However, New Jersey clay was famous for its perfect texture for making terra cotta. In a giant terra cotta merger, Tottenville and Perth Amboy plants merged with Atlanta Terra Cotta Company, making ornamental fixtures and tiles for huge architectural projects in New York. These included subway stations, the Flatiron Building and the Plaza Hotel in Manhattan. Philadelphia and other cities along the eastern seaboard also required terra cotta. There was a even a need for it in Japan. During the first quarter of the 20th century the Atlantic Terra Cotta Co. was the largest producer of architectural terra cotta in the world. By 1908 the firm operated four plants including Perth Amboy and Rocky Hill, N.J.; Staten Island, N.Y. and Eastpoint, Ga. (near Atlanta). The company maintained branch offices in New York, Atlanta, Philadelphia, Dallas and Newark, N.J. William H. Wilson presided as company president during peak years of production. National production of terra cotta quadrupled from 1900 to 1912, and the industry prospered throughout the 1920s. Terra cotta provided the ideal facade for the high rise, metal skeletal, constructed buildings. Atlantic Terra Cotta manufactured products for forty percent of the terra cotta buildings in New York City. Terra cotta's light weight, ease of production and low maintenance offered greater flexibility in design compared with traditional building materials such as stone and iron. This flexibility allowed company craftsmen to accommodate any style. Craftsmen prepared scale models from architects' drawings. From these they made full scale clay models from which they pulled plaster molds. Then they pressed one and a half inch clay slabs into the plaster molds, separating the clay elements from the molds after they dried. Finally the craftsmen glazed and fired the clay elements to achieve the final product. Flexibility of the terra cotta medium allowed manufacturers to adapt to changing architectural styles of the 1920s. Contemporary geometric building designs were enhanced by the rich coloring, texture, and patterning of terra cotta products. Machine extrusion techniques mechanized terra cotta manufacture in the late 1920's and allowed for mass production of terra cotta veneers that were both practical and fireproof. In the early 1930s, both the failure of the economy and new construction technologies contributed to the decline of the terra cotta industry. Architectural design trends at that time stressed economy and utility; and architects preferred more contemporary materials such glass and steel. The Atlantic Terra Cotta Co. closed in 1943. Significant buildings utilizing Atlantic Terra Cotta products include the Flat Iron building at 75 Fifth Avenue in New York (1901), the Woolworth Building in New York which was the world's tallest building from the time of its completion in 1908 until 1930, the Union Trust building in Detroit (1928) and the Philadelphia Museum of Art (completed c. 1933). History from Staten Island 2000. About Specimens Specimen Certificates are actual certificates that have never been issued. They were usually kept by the printers in their permanent archives as their only example of a particular certificate. Sometimes you will see a hand stamp on the certificate that says "Do not remove from file". Specimens were also used to show prospective clients different types of certificate designs that were available. Specimen certificates are usually much scarcer than issued certificates. In fact, many times they are the only way to get a certificate for a particular company because the issued certificates were redeemed and destroyed. In a few instances, Specimen certificates we made for a company but were never used because a different design was chosen by the company. These certificates are normally stamped "Specimen" or they have small holes spelling the word specimen. Most of the time they don't have a serial number, or they have a serial number of 00000. This is an exciting sector of the hobby that grown in popularity and realized nice appreciation in value over the past several years.