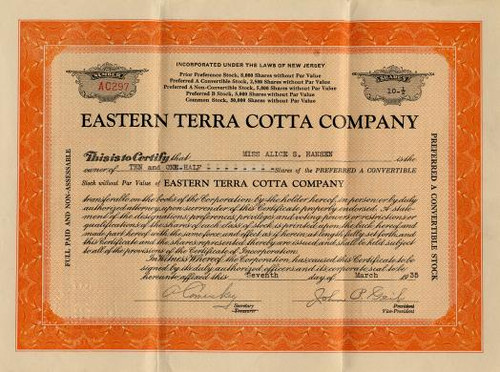 Beautifully engraved certificate from the Eastern Terra Cotta Company issued in 1935. This historic document has an ornate border around it with the company's name on top center. This item has the signatures of the Company's President and Secretary and is over 73 years old. Site today, was constructed east of the 5-story Main Building where architectural terra cotta ornaments were manufactured. It was designed by Francis H. Kimball, architect of the Montauk Club (1889-91) in Park Slope, Brooklyn. The nearby Queensboro Bridge opened in 1909 and connected East 59th Street in Manhattan to Long Island City, Queens, as well as connecting to Blackwell's Island (the original name of Roosevelt Island). The bridge's supporting piers originally included stairways and elevators, and later a large elevator structure was erected to Blackwell's Island below. The bridge, the City's first double-decker span, carried elevated railroad lines, trolley service, roadway for horse carriages, and pedestrian walkways. As such, it played a major role in stimulating residential and commercial development in the Borough of Queens.4 Real estate speculation in the 1920s resulted in the spread of development throughout Queens, and by the late 1930s, Long Island City was the center of heavy industry, including metal works, food processing, textiles and paints production, woodworking and lumber yards, and stone cutting. Following World War II, many of the industrial buildings in the area began to be converted to other uses. The conversion of the Silvercup Bakery--originally the Gordon Baking Company--to Silvercup Studios in the early 1980s is a recent example of this trend. With changing architectural styles, popular demand for carved stone and terra cotta lessened in the 1920s and 1930s. As a result, the New York Architectural Terra Cotta Company went bankrupt in 1932, and the grounds were taken over by the Eastern Terra Cotta Company, which manufactured ornaments for many Robert Moses park projects. By 1950, the property was being used for plastics sorting and the "balling" of waste paper. In 1976, all buildings on the Project Site, except the surviving office building, were torn down. History from NYC government website.