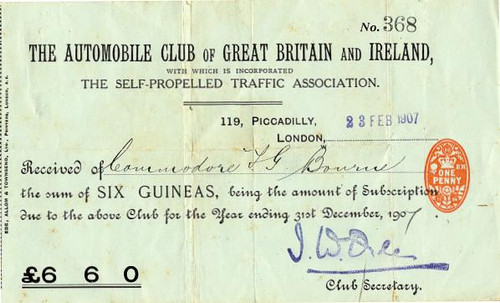 Membership certificate from the Automobile Club of Great Britain and Ireland - The Self Propelled Traffic Association issued in 1907. This historic document was printed by Ede, Allom & Townsend Printers and has an ornate border around it. This item has the printed signature of the Company's Secretary and is over 100 years old. The item was issued to Commodore L. G. Bourne. The Royal Automobile Club is a private club and is not to be confused with RAC plc, a motorists' organization, which it formerly owned. It has two club houses, one in London at 89-91 Pall Mall, and the other in the countryside of Epsom, Surrey at Woodcote Park. It was founded on 8 December 1897 as the Automobile Club of Great Britain (and later, Ireland). King Edward VII's interest in motoring led to the command "that the Automobile Club of Great Britain and Ireland should henceforth be known as The Royal Automobile Club". The headquarters were originally at 4 Whitehall Court, moving to 119 Piccadilly in 1902. In 1911 they moved to the current address, part of the site of the old War Office. The club house was (and remains) one of the largest in London, with a frontage to Pall Mall of 228 feet and a depth, in the centre, of 140 feet. It cost over a quarter of a million pounds and is described in the Survey of London as "a polished essay in the late French Renaissance manner". In 1905, the Club organised the first Tourist Trophy (TT) race -- the oldest regularly run motor race. The Club became the governing body for motor sport in Britain. The RAC were responsible for organising the first British Grand Prix motor race at Brooklands, Surrey in 1926 and also runs its sister organisation, the MSA (formerly RAC MSA). History from Wikipedia and OldCompanyResearch.com (old stock certificate research service).