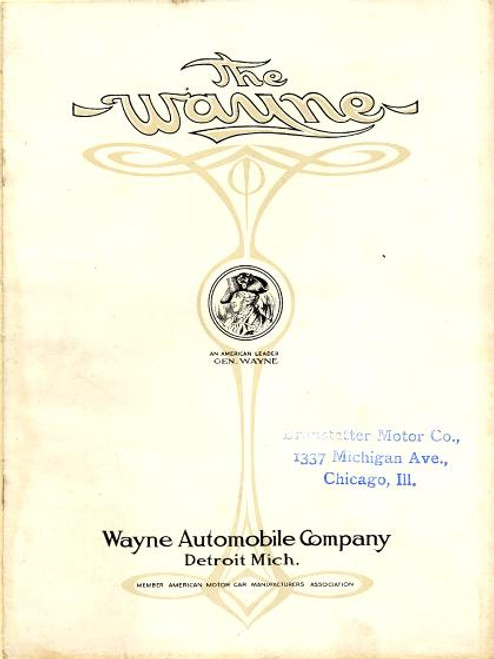 Historic Chalmers "Six" Brochure from the Wayne Automobile Company printed in 1907. This historic document has 15 printed pages with 10 pictures as well as technical specifications. The brochure has some minor wear and is a nice early piece of automotive history. 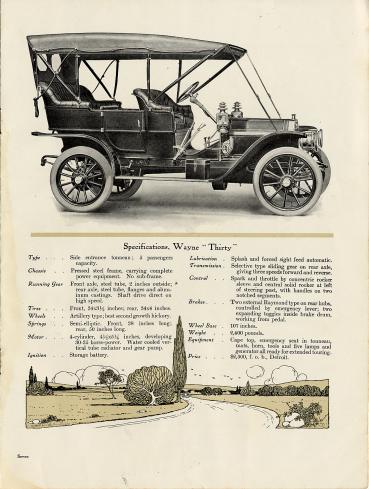 Certificate Vignette
Wayne (1904-08): The Wayne Automobile Company was formed in 1901 by Charles F. Palms (whose grandfather was the largest landowner in Michigan). The company and car were named for General "Mad" Anthony Wayne, who was decorated for his heroic efforts during the Revolutionary War and Indian wars in the Northwest Territory. The Wayne automobile was designed by William Kelly. The first Wayne had a two-cylinder motor with chain drive. It sold for $1,200 without a canopy. The three-story Wayne factory was of brick construction that measured 400 x 60 feet and was three stories high. It was situated on five acres located at Piquette and Brush. In 1907 Byron Everitt became president of the Wayne Automobile Company, and sold his Everitt Carriage Trimming Co. to Walter 0. Briggs, who had been the manager. This was the beginning of the Briggs Manufacturing Co. that supplied automobile bodies to many different companies along with many other products. Briggs was a baseball fan and personal friend of Detroit Tigers owner Frank Navin. Briggs took over the Tigers after Navin died. In early 1908 Walter Flanders left Ford Motor Co. to manage the Wayne Company. Everitt and Flanders soon formed a partnership with Bill Metzger. The Wayne marque was ended when the E.M.F. Company was organized. History from Wikipedia.