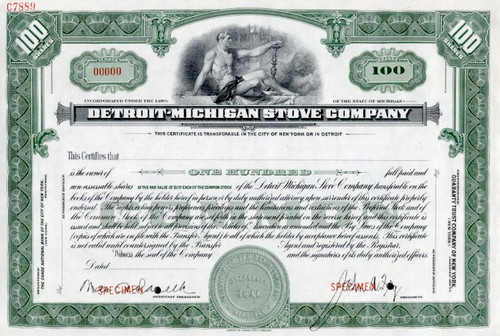 Beautifully engraved specimen certificate from the Detroit - Michigan Stove Company printed in 1937. This historic document was printed by the American Banknote Company and has an ornate border around it with a vignette of an allegorical man. This item has the printed signatures of the Company's officers. 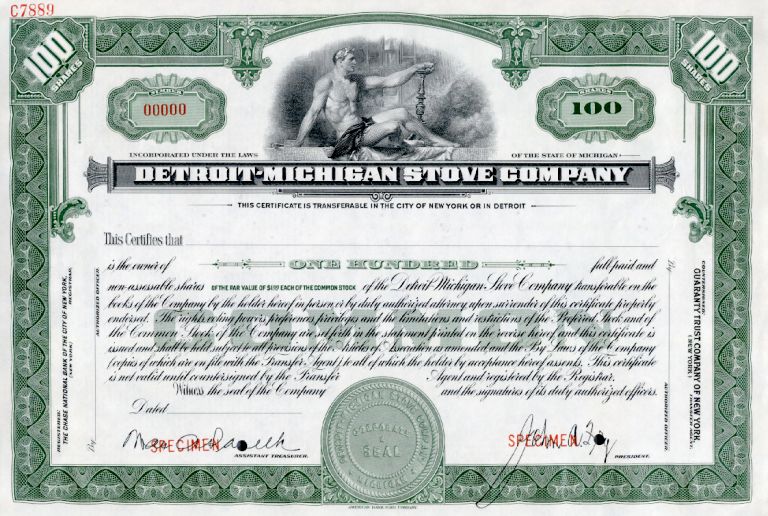 Certificate
Garland stoves were designed and manufactured in the late 1800s through 1955 by the Michigan Stove Company and became famous because of the 15-ton wooden replica stove built for the 1893 World's Columbian Exposition in Chicago. The Mammoth Garland Stove exhibit has moved around through the years and found its most recent home at the Michigan State Fairgrounds. Like the mammoth stove, Garland, the company, has gone through various moves from Michigan Stove Company to Welbilt Corporation to Berisford to Manitowoc Food Service. Through mergers and acquisitions, office and factory moves, the Garland brand of stoves has remained a premier brand in the stove and food service industries. The Garland Stove, which today is known as a premier brand of restaurant grills and ranges, had its start in Detroit in 1864. Brothers Jeremiah and James Dwyer built a small iron foundry and made cast iron coal and wood stoves. Their potbellied and parlor stoves were intended to heat homes and business. In 1872, Jeremiah Dwyer formed a group of investors and founded the Detroit-Michigan Stove Company. The Detroit-Michigan Stove Company expanded the variety of stoves available under the Garland label. They included kitchen and cooking stoves, as well as a greater variety of heating stoves. History from Wikipedia, Encyberpedia, eHow and OldCompany.com (old stock certificate research service) About Specimen Certificates Specimen Certificates are actual certificates that have never been issued. They were usually kept by the printers in their permanent archives as their only example of a particular certificate. Sometimes you will see a hand stamp on the certificate that says "Do not remove from file". Specimens were also used to show prospective clients different types of certificate designs that were available. Specimen certificates are usually much scarcer than issued certificates. In fact, many times they are the only way to get a certificate for a particular company because the issued certificates were redeemed and destroyed. In a few instances, Specimen certificates were made for a company but were never used because a different design was chosen by the company. These certificates are normally stamped "Specimen" or they have small holes spelling the word specimen. Most of the time they don't have a serial number, or they have a serial number of 00000.