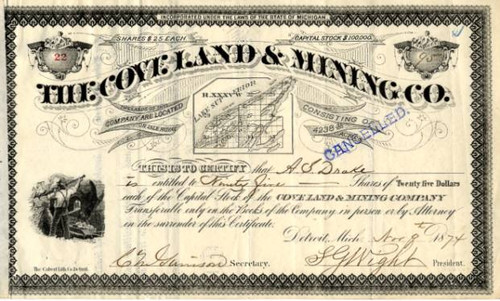 Beautifully engraved certificate from the Cove Land & Mining Company issued in 1874. This historic document was printed by Calvert Lith. and has an ornate border around it with a vignette of a detailed map of a section of Michigan and Lake Superior. Miner, lower left. This item is hand signed by the Company's President and Secretary and is over 135 years old. 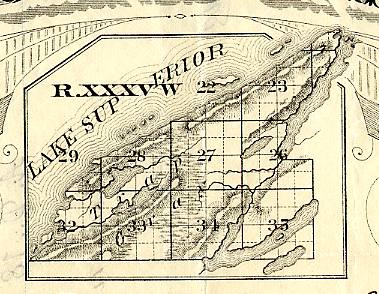 Certificate Vignette
A densely forested, wind-lashed island wilderness in the northwest corner of Lake Superior, Isle Royale National Park offers outstanding backcountry recreation and rich human and natural history. It's one of the few places in the United States that's beyond the reach of the automobile--the only way to get yourself into the park is via ferry or seaplane. And the island itself is a jigsaw puzzle of land and water, a complex topography that attracts kayakers, canoeists, divers, and anglers, as well as long-distance hikers. A giant, jagged seam in the enormous crease left in the earth as glacial ice retreated some 10,000 years ago, Isle Royale is the largest island in the world's largest freshwater lake. Native Americans dug copper here 3,000 years ago. Later French, English, and Americans trapped a wealth of furs. During the 19th century's "copper fever," mining companies sank shafts in the bedrock--left behind are more than 1,000 mining pits. Commercial fishing supplanted mining in the early 20th century, until the park was established in the 1930s. Isle Royale is ecologically complex. Three distinct forest types-- including a remnant of ice-age boreal woodlands--grow on an island just nine miles wide and 45 miles long. A century ago, lynx and caribou were the dominant mammals. Today, these species are extinct, replaced by wolves and moose, which only arrived here from the mainland in the 20th century.