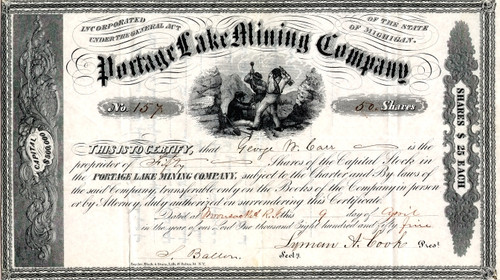 Beautifully engraved issued certificate from the Portage Lake Mining Company printed in 1855. This historic document was printed by Snyder, Black and Sturn of New York and has an ornate border around it with a vignette of three miners. This item has the signatures of the Company's President, Lyman A. Cook and Secretary, S. Ballon and is over 164 years old.

Certificate Vignette
Portage Lake Mine of Lake Superior. Early! Incorporated in Michigan. No. 157, issued for 50 shares to George Carr. on April 9th, 1855. Signed by president Lyman A. Cook and secretary S. Ballon. Not cancelled. Black border and print. Vignette of three prospectors. Printed by Snyder, Black & Sturn, NY. 6.25 x 10.5" Folds, light wear. Portage Lake (now called The Keweenaw Waterway) is a partly natural, partly artificial waterway which cuts across the Keweenaw Peninsula of Michigan near Lake Superior. In October of 1848, the Quincy became the first operating mine in the Portage Lake district. The Portage Lake MC was located on the quarter section immediately north of the Isle Royal, working the Middle and East Sheldon veins. [Ref: The Mining Magazine and Journal of Geology, Mineralogy, Metallurgy ..., Volume 1, 1853] Houghton Estate Collection