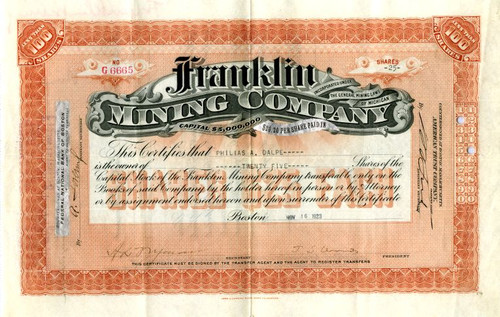 Beautifully engraved certificate from the Franklin Mining Company issued in 1923. This historic document was printed by the John A. Lowell Banknote Company and has an ornate border around it with the company's name on top center. This item has the signatures of the Company's President and Secretary. 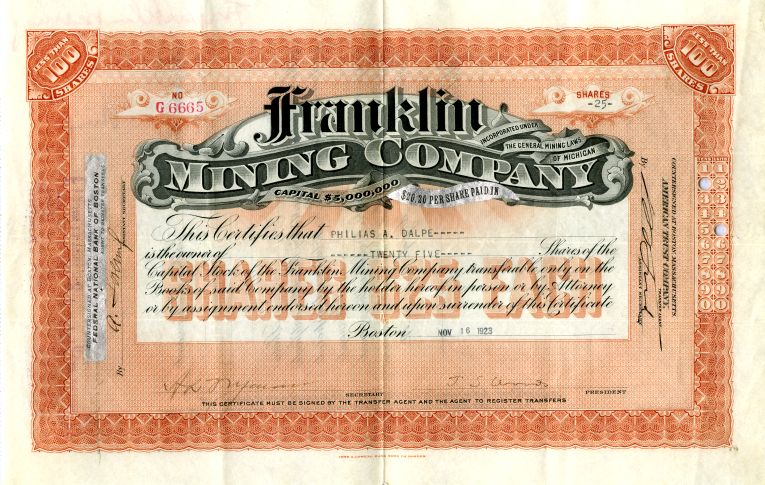 Certificate
The Franklin Mining Company, one of the oldest mining corporations in the Upper Peninsula, was organized in 1857. The old Franklin mine is surrounded on three sides by the Quincy location, which has cut off the Franklin Mining Company from following the lode beyond. Openings in the original mine, embracing 160 acres, were made in the Pewabic lode. The properties of the company also include the Franklin Junior mine of 1,359 acres, which was opened in 1860 as the Albany & Boston mine and bought by the present proprietors in 1895; as well as surface rights to an additional quarter-section, a millsite of nearly 200 acres at Grosse Pointe and one mile of frontage on Portage lake. The total output of the company in 1909 was 1,615,556 pounds of copper. History from A History of the Northern Peninsula of Michigan and Its People ..., Volume 1, Wikipedia and OldCompany.com (old stock certificate research service)