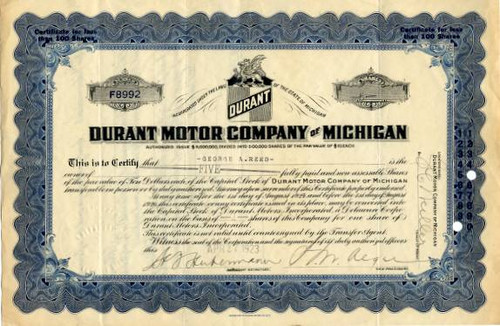 Beautifully engraved certificate from the Durant Motor Company of Michigan issued in 1923. This historic document was printed by Hamilton Bank Note and has an ornate border around it with a vignette of company logo. This item is hand signed by the Company's Vice-President and Secretary and is over 82 years old.

Certificate Vignette
Durant Motors, Inc., was founded in January, 1921, by W. C. Durant, one of the country's most brilliant executives. W. C. Durant is a pioneer in motor transportation. He has played an important part in developing the automotive industry from a comparative infant to a veritable giant. He was the organizer of General Motors and is credited with having brought about the outstanding success of such automobiles as Buick, Cadillac, Chevrolet, Oldsmobile and Oakland. He has also created or fostered a number of other important enterprises, among them Frigidaire, a General Motors product.