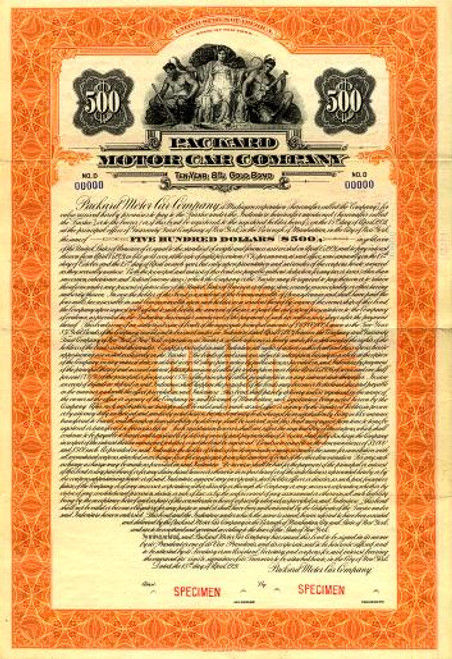 Beautiful engraved Specimen Gold Bond Certificate from the Packard Motor Car Company dated in 1921. This historic document was printed by American Bank Note Company and has an ornate border around it with a vignette of a group of allegorical people. This item is over 86 years old. Minor wear on folds. 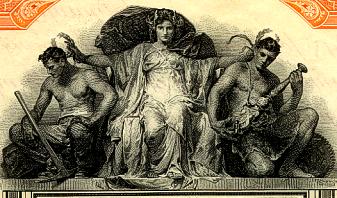 Certificate Vignette
Packard was a United States based brand of luxury automobile built by the Packard Motor Car Company of Detroit, Michigan, and later by the Studebaker-Packard Corporation of South Bend, Indiana. The first Packard automobiles were produced in 1899 and the brand went off the market in 1958. Packard automobiles are highly sought after by collectors today, and the marque enjoys an active collectors club system. Packards were advertised with the slogan "Ask the Man Who Owns One". 1913 Packard 6 Packard Twin-Six Touring 1916 Packard Second Series 243 Touring 1926 Packard Fourth Series 426 Roadster 1927 Packard Sixth Series 645 De Luxe Eight Dual Cowl 1929 Packard was founded by brothers James Ward Packard (Lehigh University Class of 1884) and William Dowd Packard in the city of Warren, Ohio . The Packards believed that they could build a better automobile and James, a mechanical engineer, had some ideas how to improve on the designs of current automobiles. By 1899, the brothers were building vehicles in their native Warren, Ohio. The company, which they called the Ohio Automobile Company, quickly introduced a number of innovations in its designs, including the modern steering wheel and the first production 12-cylinder engine. While Henry Ford was producing cars that sold for $440, the Packards concentrated on more upscale cars that started at $2,600. Packard automobiles developed a following not only in the United States, but also abroad, with many heads of state owning them. In need of more capital, the Packard brothers would find it when Henry Bourne Joy, a member of one of Detroit's oldest and wealthiest families, bought a Packard. Impressed by its reliability, he visited the Packards and soon enlisted a group of investors that included his brother-in-law, Truman Handy Newberry. On October 2, 1902, Ohio Automobile Company became Packard Motor Car Company, with James as president. Packard moved its automobile operation to Detroit soon after and Joy became general manager and later chairman of the board. One of the original Packards, if not the original, is still located at the Packard Museum in Warren, Ohio on Mahoning Avenue. The Packard's factory on East Grand Boulevard in Detroit was designed by Albert Kahn, and included the first use of reinforced concrete for industrial construction in Detroit. When opened in 1903, it was considered the most modern automobile manufacturing facility in the world and its skilled craftsmen practiced over eighty trades. The 3.5 million ft2 (325,000 m²) plant covered over 35 acres (142,000 m²) and straddled East Grand Boulevard. It was later subdivided by eighty-seven different companies. Kahn also designed The Packard Proving Grounds at Utica, Michigan. Throughout the nineteen-teens and twenties, Packard built vehicles consistently were among the elite in luxury automobiles. The company was commonly referred to as being one of the "Three P's" of American motordom royalty, along with Pierce-Arrow of Buffalo, New York and Peerless of Cleveland, Ohio. Packard's leadership of the luxury car field was supreme History from Wikipedia and OldCompanyResearch.com. About Specimens Specimen Certificates are actual certificates that have never been issued. They were usually kept by the printers in their permanent archives as their only example of a particular certificate. Sometimes you will see a hand stamp on the certificate that says "Do not remove from file". Specimens were also used to show prospective clients different types of certificate designs that were available. Specimen certificates are usually much scarcer than issued certificates. In fact, many times they are the only way to get a certificate for a particular company because the issued certificates were redeemed and destroyed. In a few instances, Specimen certificates we made for a company but were never used because a different design was chosen by the company. These certificates are normally stamped "Specimen" or they have small holes spelling the word specimen. Most of the time they don't have a serial number, or they have a serial number of 00000. This is an exciting sector of the hobby that grown in popularity over the past several years.