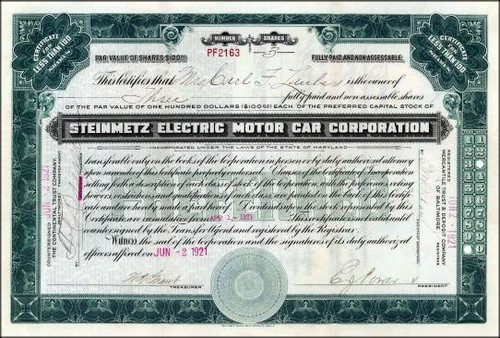 Beautifully engraved certificate from the Steinmetz Electric Motor Car Corporation issued in 1921. This historic document was printed by the Security Banknote Company and has an ornate border around it. This item is hand signed by the Company's President and Treasurer and is over 83 years old. Charles Steinmetz formed the Steinmetz Electric Motor Car Co. in 1920 to designed prototypes of several electric vehicles. The company was in Brooklyn, where it produced an industrial truck and a lightweight delivery car. The first electrical Steinmetz truck hit the road in early 1922 by climbing a steep hill in Brooklyn as a publicity stunt. In October, the company claimed to have developed a five-passenger coupe. Steinmetz planned for the company to turn out 1,000 trucks and 300 cars annually, but that was cut short by his death in 1923. The company folded shortly after Steinmetz's death when a lawsuit from a shareholder revealed that the company had misrepresented the number of cars being produced. His inventions covered the field of electrical applications -- generators, motors, transformers, lightning arrestors, lighting, heating, and electrochemical operations.