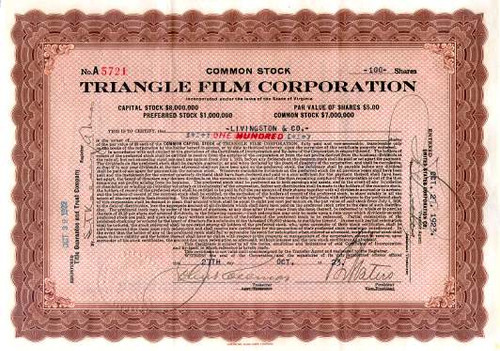 Beautifully engraved certificate from the Triangle Film Corporation issued in 1923. This historic document was printed by the American Banknote Company and has an ornate border around it. This item is hand signed by the company's president and treasurer and is over 83 years old. The certificate was issued to Joseph F. Marshall. Triangle Film Corporation was founded by Harry (1877-1956) and Roy Aitken (1882-1976), two brothers from the Wisconsin farmlands who pioneered the studio system of Hollywood's Golden Age. Combining production, distribution, and theater operations under their Triangle Film Corporation, the young upstarts created the most dynamic studio in Hollywood. They attracted the greatest directors and stars of the day -- including D.W. Griffith, Mary Pickford, Lillian Gish, Roscoe "Fatty" Arbuckle, and Douglas Fairbanks, Sr. -- and produced some of the most enduring films of the silent era, from the Keystone Cops to the defining cinematic epic Birth of a Nation. Triangle Film Corporation was the first time a film company went public which was in 1915.