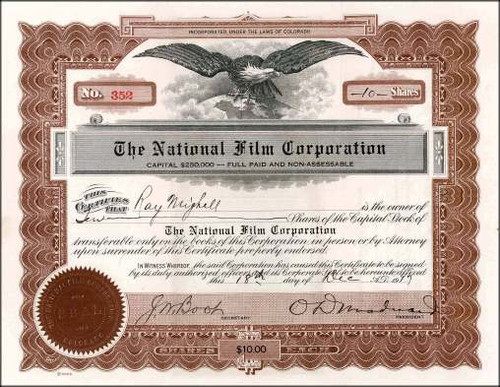 Beautifully engraved certificate from the National Film Corporation issued in 1917. This historic document has an ornate border around it with a vignette of an eagle. This item is hand signed by the Company's President and Secretary and is over 85 years old. The National Film Corporation began in the spring of 1915. Needing additional studio space, in 1918 they purchased the former Oz Studio at the northwest corner of Santa Monica Boulevard and Gower Street, but the entrance was at 1116 Lodi Street. It was at this site that portions of their three Tarzan films were lensed, "Tarzan of the Apes", "The Romance of Tarzan", and "The Son of Tarzan". In 1923, the company ceased operation.