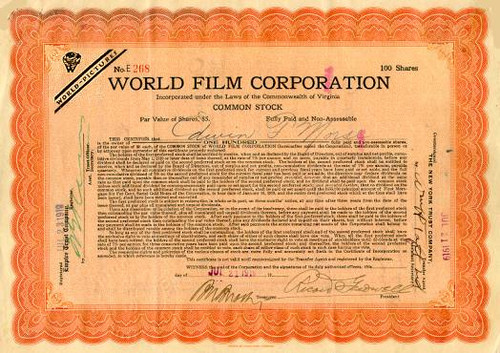 Beautifully engraved Certificate from the famous World Film Corporation issued in 1919. This historic document was printed by the American Banknote Company and has an ornate border around it with a vignette in the upper left of the company's famous logo above the words World - Pictures. This item is hand signed by the company's president and is over 81 years old. Please note the transfer agents signature is William H. Taft 2nd on the right side. In February 1915, the World Film Corporation was formed. It included the theatrical interests of the Shuberts and William A. Brady. Arthur Spiegal, head of a mail order house became president and Lewis J. Selznick, a former small-time jeweler, was vice president and general manager. Their first major move was the acquistition of of Clara Kimball Young, Vitagraph star with sensational box office power. According to Photoplay Magazine in 1915, The World Film Corporation was a large feature film company, both exchange and producer, had a committed capitaization of $2,000,000 in 1915, par value of $5.00 a share, of which about $1,500,000 was outstanding. On its public statement for the year ending June 27, 1915, this concern showed a net profit for the year of $329,000 or a little over 20% earned on the stock outstanding, but as yet it has paid no dividends. The stock of this concern has been active on the New York Curb Market at prices both below and above its par value.