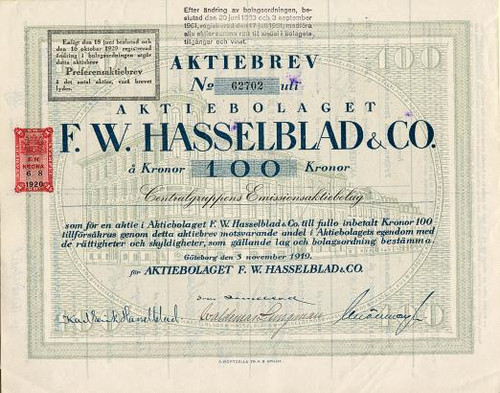 Beautifully engraved certificate from the F.W. Hasselblad & Company issued in 1919. This historic document was printed by A. Bortzellss and has an ornate border around it with an underprint of the company's headquarters. This item has the printed signatures of the Company's officers including Karl Erik Hasselblad, and is over 88 years old. Promoter's share. Based on Fritz Victor Hasselblad in GÃ¶teborg as trading firm. The city GÃ¶teborg with their proximity to the Central European commercial centres and their long commercial tradition with Great Britain, the Netherlands, Denmark and Germany, was ideally suitable for an international import export enterprise. F.W. Hasselblad & CO. became soon one of the fastest increasing Swedish trading firms. Arvid Viktor Hasselblad, son of the firm founder and an inspired amateur photographer, creates 1885 within the company its own photo department, which becomes soon most important two of the company. It takes place an exclusive partnership with George Eastman, the founder of the enterprise East Kodak CO. 1908 are then separated OFF the photo department as an independent company Hasselblads Fotografiska. The F.W. Hasselblad & CO. 1919 are converted into an AG. Karl Erik Hasselblad, the father of the later inventor Victor, leads then the two enterprises than president, whereby the STARTING FROM F.W. Hasselblad & CO. control keeps: it holds 14579 shares of the Hasselblads Fotografiska. F.W. Hasselblad & Co. was formed in Gothenburg in western Sweden in 1841. It was an import-export company and became associated with photography when Arvid Viktor Hasselblad, son of the founder and a keen amateur photographer, established a photographic division to import film into the country. The popularity of photography was increasing and Arvid Viktor formed a business partnership with George Eastman (founder of Kodak) to become the exclusive Swedish distributor of Kodak products. The photographic division grew rapidly and in 1908 a separate firm, Fotografiska AB, was formed to deal with the increased business. Victor Hasselblad, great-grandson of the founder, continued the company's association with Kodak and the family friendship with Eastman. He became a keen photographer, publishing a book of photos of birds in flight, but he fell out with his father and in 1937 opened his own photo shop, 'Victor Foto'. During the Second World War the Swedish military 'captured' a fully functioning German aerial surveillance camera. Victor had acquired a reputation as a camera expert and the authorities asked him if he could produce a replica. History from Wikipedia and OldCompanyResearch.com.