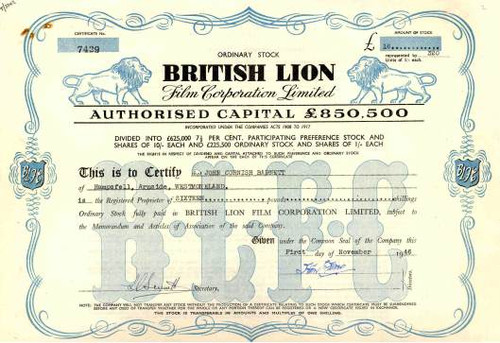 Beautifully engraved certificate from the British Lion Film Corporation issued in 1946. This historic document has an ornate border around it with a vignette of the company name between lions. This item is hand signed by the Company's Director and Secretary and is over 74 years old.

Certificate Vignette
British Lion Film Corporation was taken over by EMI in 1976, the collection was subsequently sold to Cannon, then Weintraub Entertainment, then Movie Acquisitions Corporation, which was renamed Lumiere Pictures, then UGC (DA), now with Canal + Image. The British Lion name continued post-1976 in an independent production capacity.