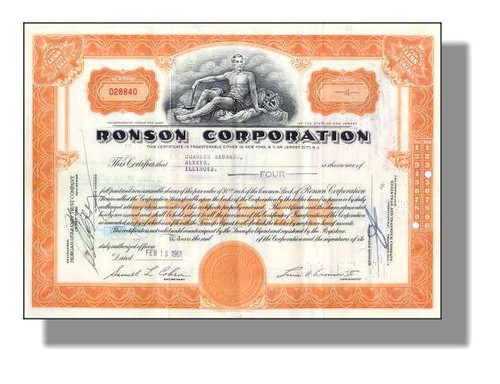 Beautifully engraved Certificate from the famous Ronson Corporation issued in 1963 - 1983. This historic document was printed by the Federated Banknote Company and has an ornate border around it with a vignette of allegorical man sitting in front of a gear hold a hammer. This item has the printed signature of Louis Aronson II as President. The Ronson name came from Aronson's last name. 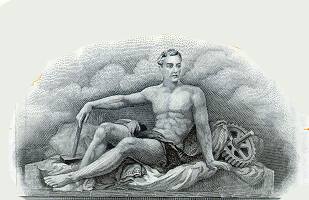 Certificate Vignette
Ronson Corporation is engaged in the businesses of consumer products and aviation operations and services. RONC's products include lighters and related products, surface protectants and lubricating sprays. Narrative description of the current business. (1) Consumer Products The Company's consumer packaged products, which are manufactured in Woodbridge, New Jersey, and distributed in the United States by the Company's wholly owned subsidiary, Ronson Consumer Products Corporation ("RCPC"), include Ronsonol lighter fluid, Multi-Fill butane fuel injectors, flints, wicks for lighters, a multi-use penetrant spray lubricant product under the tradename "Multi-Lube", a spot remover under the product tradename "Kleenol", and a surface protectant under the tradename "GlossTek". In addition, the Company's consumer packaged products are marketed in Canada through Ronson Corporation of Canada, Ltd. ("Ronson-Canada"), a wholly owned subsidiary of the Company. RCPC and Ronson-Canada together comprise Ronson Consumer Products. The Company also distributes its consumer products in Mexico. A subsidiary of WalMart Stores, Inc. ("WalMart") is a significant distributor for the consumer products segment and, as such, supplies Ronson's products to numerous retailers. Management does not believe that this segment is substantially dependent on WalMart or its distributor subsidiary because of the presence of many other distributors which provide retailers with Ronson's consumer products. Sales to various units of WalMart in 1998 and 1997 accounted for 12% and 10%, respectively, of Consolidated Net Sales of the Company and 18% and 15% of Net Sales of the segment in 1998 and 1997, respectively, most of which were to its distributor subsidiary. The consumer products are distributed through distributors, food brokers, automotive and hardware representatives and mass merchandisers, drug chains and convenience stores in the United States and Canada. Ronson Consumer Products is a principal supplier of packaged flints and lighter fuels in the United States and Canada. These subsidiaries' consumer products face substantial competition from other nationally distributed products and from numerous local and private label packaged products. Since Ronson Consumer Products produces packaged products in accordance with its sales forecasts, which are frequently reviewed and revised, inventory accumulation has not been a significant factor, and this segment does not have a significant order backlog. The sources and availability of raw materials for this segment's packaged products are not significant factors. Ronson Consumer Products also distributes three lighter products - the "RONII" refillable butane lighter, the Ronson "WINDII" liquid fuel windproof lighter, and the Ronson "Varaflame Ignitor", used for lighting fireplaces, barbecues, camping stoves and candles. The lighter products are marketed in the United States, Canada and Mexico. In 1995 Ronson Consumer Products introduced a new lighter product, the RONII refillable butane lighter, in both the United States and Canada. The RONII is a pocket lighter that meets the new child resistant requirements issued by the Consumer Product Safety Commission. The RONII is manufactured for the Company in Spain and is sold through the Company's distribution channels. The RONII is priced competitively but has strong competition from several other brands of disposable lighters and unbranded imports from China and other Far Eastern countries. In January 1997 Ronson Consumer Products introduced a new lighter product, the WINDII windproof lighter, in the United States and Canada. The WINDII uses Ronson flints, Ronsonol lighter fuel and Ronson wicks. The WINDII faces strong competition from other nationally distributed brands and from unbranded imports. The WINDII lighter and Varaflame Ignitor are manufactured in China, both in accordance with the design specifications of the Company. The Company has the exclusive right to market these products in the United States, Canada and Mexico, and does so through its distribution channels. The Varaflame Ignitor is refillable with Ronson butane refills and is less expensive than most other refillable ignitors. The Varaflame Ignitor encounters strong competition from imported disposable ignitors. (2) Aviation - Fixed Wing Operations and Services and Helicopter Services Ronson Aviation, Inc. ("Ronson Aviation"), a wholly owned subsidiary of the Company, headquartered at Trenton-Mercer Airport, Trenton, New Jersey, provides a wide range of general aviation services to the general public and to government agencies. Services include air charter, air cargo, cargo handling, avionics, management aviation services, new and used aircraft sales, aircraft repairs, aircraft fueling, storage and office rental. This subsidiary's facility is located on 18 acres, exclusive of four acres on which Ronson Aviation has a first right of refusal, and includes a 52,000 square foot hangar/office complex, two aircraft storage units ("T" hangars) and a 58,500 gallon fuel storage complex (refer to Item 2-Properties, (4) Trenton, New Jersey). In its passenger and cargo services, Ronson Aviation operates a total of three aircraft, including a Citation Jet and two twin-engine turbo-prop airplanes in charter operations. Ronson Aviation is an FAA approved repair station for major and minor airframe and engine service and an avionics repair station for service and installations. Ronson Aviation is an authorized Raytheon Aircraft and Parts Sales and Service Center and a customer service facility for Bell Helicopter Textron. At December 31, 1998, Ronson Aviation had one new aircraft in sales inventory and orders to purchase three new aircraft from Raytheon Aircraft Corporation, all of which are for resale. The total sales value of these aircraft is approximately $1,835,000. The orders are subject to cancellation by Ronson Aviation. Ronson Aviation is subject to extensive competition in its air charter activities, but Ronson Aviation is the only provider of aviation services to the private, corporate and commercial flying public at Trenton-Mercer Airport in Trenton, New Jersey. History from company press information.