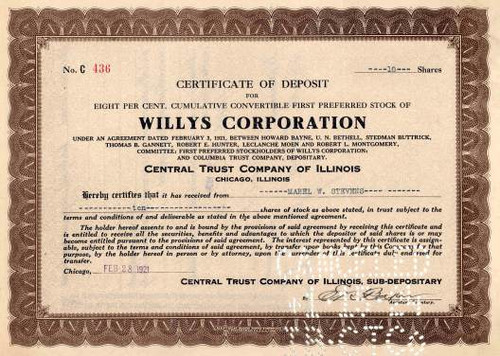 Beautifully engraved Certificate of Deposit Certificate for 8% Cumulative Preferred Stock from the Willys Corporation issued no later than 1924. This historic document was printed by the American Banknote Company and has an ornate border around it. This item is hand signed by the Assistant Secretary and is over 95 years old. In 1911, the Electric Auto-Lite Company was organized. The company manufactured automobile lighting and ignition equipment, and later added battery and farm lighting divisions. The Electric Auto-Lite Company was acquired by John Willys in 1914 and he changed its name to the Willys Corporation in 1917. In 1919, the company acquired the entire capital stock of the New Process Gear Corporation of Syracuse, N.Y. and of the Dusenberg Motors Corporation. Willys Corporation was also a major shareholder in the Willys - Overland Company. In 1945, Willys-Overland begins producing the Civilian Jeep (CJ) line, with the introduction of the CJ2A model. In 1946, production begins on the Willys Jeep Wagon. Over 300,000 are manufactured between 1946 and 1965. CJ3A is introduced, and more than 132,000 are made before the production ends in 1953.