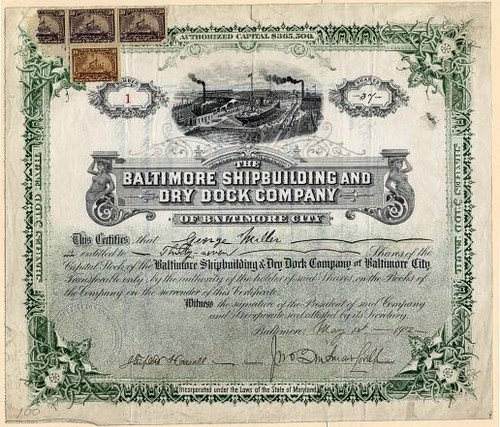 Beautiful certificate #2 from the Baltimore Shipbuilding and Dry Dock Company. This historic document was printed by the A. Hoen & Company and has an ornate border around it with a vignette of a ship in dry dock. This item has the signatures of the Company's President, J. Quitman Lovell and Secretary, and is over 111 years old. 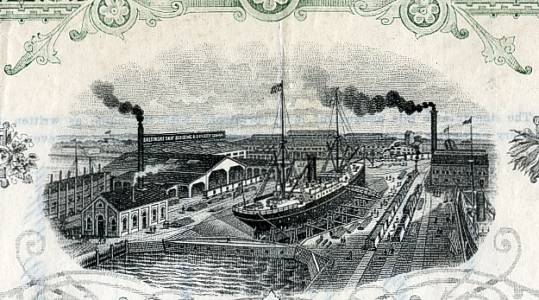 Certificate Vignette
The Columbian Iron Works and Dry Dock Company (1872-1899), was located in Baltimore, Maryland on the Locust Point peninsula, adjacent to Fort McHenry. Founded by William T. Malster (1843-1907) who later partnered with William B. Reaney in 1879, it opened for business on 16 July 1880. The company was located on 8 acres (32,000 m2) adjacent to Ft. McHenry where it leased the property from the Baltimore Dry Dock Company. It built several early vessels of the United States Navy and US Coast Guard, including: USRC Tench Coxe USRC Seminole USS Detroit USS Petrel USS Plunger USS Montgomery USS Foote USS Rodgers USS Winslow USS McKee USS Tingey It also built the Argonaut, a submarine designed by Simon Lake. It went into receivership in 1899 and was reorganized as Baltimore Shipbuilding & Dry Dock Company and was purchased by William B. Skinner and Sons in 1905. In 1915, Skinner and Sons went into receivership and was reorganized as the Baltimore Dry Dock and Shipbuilding Corporation. This company was taken over by Bethlehem Steel in September 1921. History by OldCompany.com