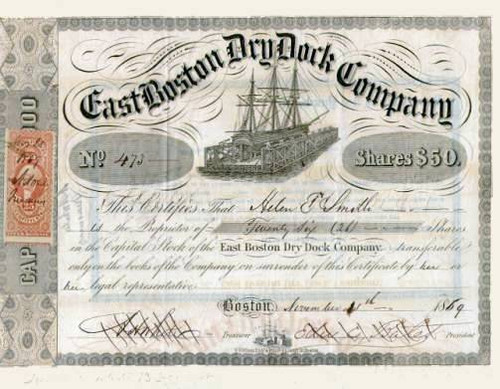 Beautifully engraved certificate from the East Boston Dry Dock Company issued in 1856. This historic document has an ornate border around it with an incredible vignette of an early sailing vessel in wooden dry dock. This item is hand signed by the Company's President and Treasurer and is over 162 years old. 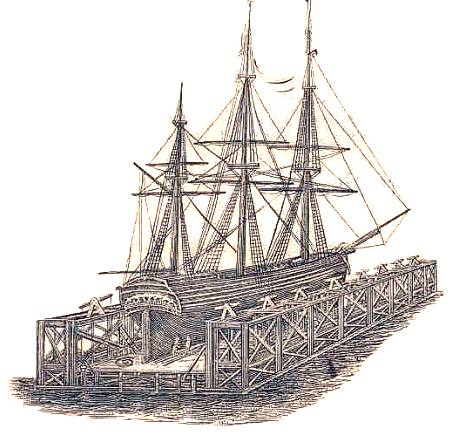 Certificate Vignette
East Boston was the center of Boston's wooden shipbuilding industry in the 1840s and 50s--the heyday of the clipper ships. Shipyards and related industries lined the Border and Sumner Street waterfronts. Notable among these were Donald McKay's yard on Border Street between Monmouth and Eutaw and Samuel Hall's East Boston Dry Dock Company on the present Boston East site. After the wooden shipbuilding industry was ended by the panic of 1857 and the rise of iron-hulled steamships, East Boston continued to be a locus of ship construction and repair. In the later nineteenth century, there were shipyards with marine railways and drydocks not only on the Border and Sumner Street waterfronts but also Simpson's Dry Dock Company on Marginal Street on the site of the present Massport shipyard and a yard on Condor Street. In addition, there were a number of shipbuilding-related industries on the waterfront, such as the Atlantic Works, which built marine steam engines and iron-hulled vessels at its site on Border Street, and Hodge Boiler Works, which manufactured ship boilers and moved from Liverpool to Sumner Street in 1902. Ship repair continued to be an important East Boston waterfront industry in the twentieth century. The Atlantic Works purchased the former East Boston Dry Dock Company site on Border Street in 1902 and by 1922, with a number of floating dry docks and marine railways, was the largest private ship repair facility in Boston. In 1928 Bethlehem Shipbuilding purchased both the Atlantic Works and the Simpson sites and operated both shipyards during World War II. More recently, General Ship Corporation operated a repair facility at the site of the original Donald McKay yard on Border Street. The only remaining shipyard now in East Boston is Massport's on the site of the former Simpson/Bethlehem yard on Marginal Street. History from The Boston Redevelopment Authority and OldCompany.com (old stock certificate research service).