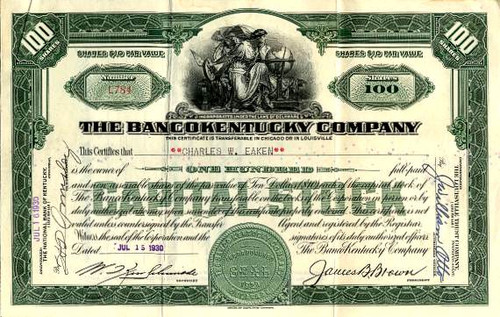 Beautifully engraved certificate from the BancoKentucky Company issued no later than 1930. This historic document was printed by American Bank Note Company and has an ornate border around it with a vignette of a lady sitting on a bench looking at a goble. This item has printed signatures by the Company's President ( James B. Brown) and Secretary and is over 92 years old. 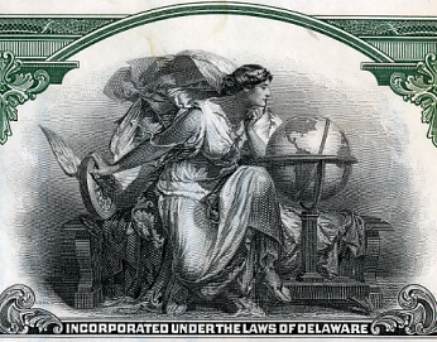 In the 1920s, Louisville's National Bank of Kentucky, known as BancoKentucky, was the largest financial institution in the entire South. It was controlled by the flamboyant, self-made millionaire James B. Brown, a colorful and, according to some, a careless, even reckless businessman. Working at night and sleeping, vampire-like, during the day, he built up a powerful empire based on his interests in the media, politics, and banking. He also made many bad loans. By the time the Great Depression hit in 1929, BancoKentucky was in trouble. After a doomed merger with an equally weak Tennessee firm, BancoKentucky failed in 1930 and took several smaller banks down with it. If Brown had been a better businessman, Kentucky might have become the financial center of the South. The state would have had more control over its economic destiny, and been less of a colonial economy.