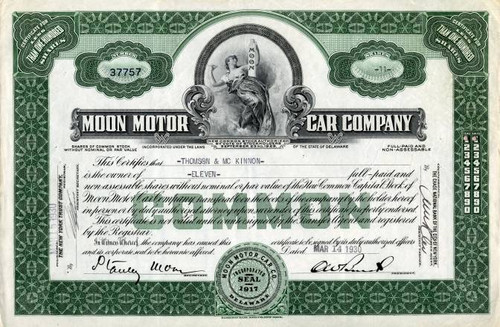 Beautifully engraved Certificate from the Moon Motor Car Company issued in 1930. This historic document was printed by the Hamilton Banknote Company and has an ornate border around it with a vignette of a woman holding the Moon Logo. This item has the signatures of company's officers and is over 89 years old. 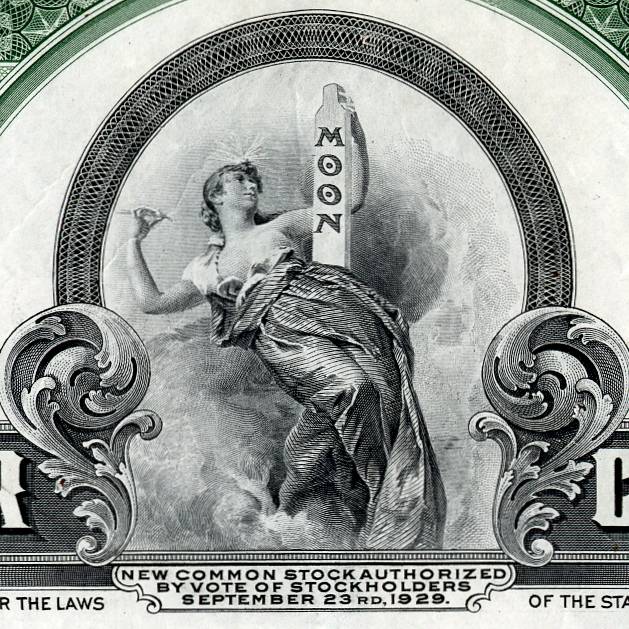 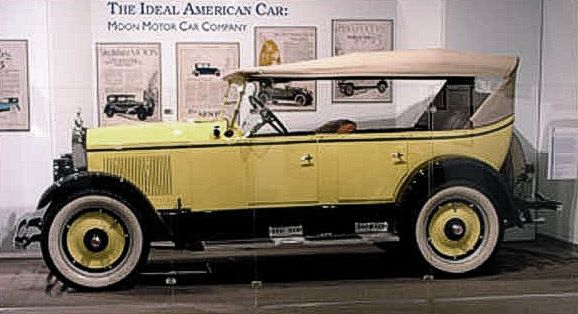 Example of Car in Museum shown for illustrative purposes
In addition to the Moon name, Moons were sold under the Hol-Tan name in 1908. Moon produced the Diana via its subsidiary the Diana Motors Company in 1925 - 1928. Another subsidiary produced the Windsor in 1929-1930. The firm also produced a Cotton picker built under contract from the American Cottonpicker Corporation. Beginning in 1924, Moon was increasingly unable to meet dealership orders. The company went out of business at the start of the Great Depression; the Moon factory was purchased by Ruxton automobile. Moon automobiles are on display at the Missouri History Museum and Museum of Transportation in St. Louis, Missouri. The amusement park Six Flags St. Louis also features a ride using the Moon automobile body. The company was an outgrowth of the J.W. Moon Buggy Company founded in 1894. Moon's first car was designed by Louis Mooers, the man behind the design for Peerless. Moons were aimed at the wealthier crowd, a hint of that showing in its Rolls-Royce style grille. Their engines were especially refined in 1922. They had four main bearings, a rarity at the time. Moons did not have 8-cylinder engines until 1928, when the Aerotype debuted. Also, in 1929, they made the Prince of Windsor, named after the Prince of Wales. Moon acquired New Era Motors in 1929, but collapsed soon thereafter. The Moon Series "A" touring car offered a balanced collection of the best parts money could buy. Rather than manufacture their own parts for the car, Moon officals sought the best components from parts manufacturers for use in their cars. Parts were supplied by companies like Lockheed, Warner, Spicer, Timken, and Delco, which allowed for innovations to be incorporated quickly. For example, Moon was a leader in the use of hydraulic brakes in this 1924 model, several years ahead of most other car makers. The Moon Series "A" was considered the company's first "light car:' The weight was reduced by new technologies like "balloon tires" that made it possible to use less metal in the suspension and modify the steering mechanism. The cars were more roadworthy, agile, and economical. History from Wikipedia, Missouri History Museum OldCompany.com (old stock certificate research service)