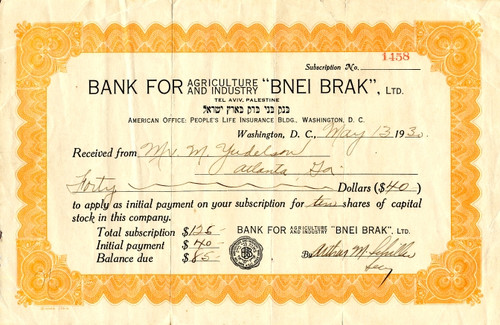 Beautiful certificate from the Bank for Agriculture and Industry "Bnei Brak", Ltd. issued in 1930. This historic document was printed by GOES and has an ornate border around it. This item has been hand signed by the Company's Secretary, and is over 82 years old. Bnei Brak is the only large city in Israel whose inhabitants are mainly ultra-Orthodox Jews. The city is located in the Dan metropolitan region east of Tel Aviv. Its small physical size and large number of inhabitants (some 150,000) make it Israel's most densely-populated city. Moreover, its birth rate is one of the highest in the country. Bnei Brak started out in 1924 as an agricultural settlement established by a group of Polish Hassidim (members of a Jewish mystic movement founded in the 18th century in Eastern Europe). However, due to a lack of land, many of its founders were forced to turn to other occupations, such as commerce and handicrafts, and soon Bnei Brak assumed an urban character.