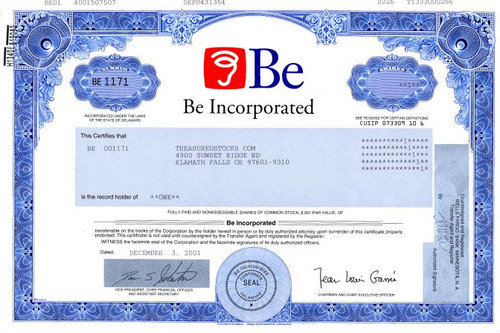 Beautifully engraved certificate from Be Incorporated issued in 2001. This historic document was printed by the Security-Columbian United States Banknote Company and has an ornate border around it with the Company's logo of an abstract red and white design next to the big blue word "Be". This item has the printed signatures of the Company's Vice President/Chief Financial Office/Assistant Secretary and Chairman/Chief Exective Officer, Jean-Louis GassÃ©e and is over 10 years old.

Company Trade Mark
Be Incorporated was an American computer company founded in 1990, best known for the Be Operating System (BeOS) and BeBox personal computer. Be was founded by former Apple Computer executive Jean-Louis GassÃ©e with capital from Seymour Cray. Be's corporate offices were located in Menlo Park, California; as well as regional sales offices in France and Japan. The company later relocated to Mountain View in California for the duration of its dissolution. The main intent of Be was to develop a new operating system using the C++ programming language on a proprietary hardware platform. The BeOS ran on the BeBox, but was later ported to Apple Computer's Power Macs despite resistance from Apple, due to the hardware specifications assistance of Power Computing. In 1998, the system was ported to the Intel x86 architecture, and PowerPC support was reduced, finally being dropped after BeOS R5. Be was founded by former Apple Computer executive Jean-Louis GassÃ©e in 1990 with Steve Sakoman after being ousted by Apple CEO John Sculley. Be aimed to create a modern computer operating system written in C++ on a proprietary hardware platform. In 1995, the BeBox personal computer was released by Be, with its distinctive strips of lights up the front that indicated the load of each CPU, and the combined analogue/digital, 37-pin GeekPort has made it a highly desirable item for collectors[citation needed]. In addition to BeOS and BeBox, Be also produced BeIA, an ill-fated OS for internet appliances. It was however used commercially by Sony (with the eVilla) and DT Research, amongst others, during its short lifespan. In 1996, Apple was searching for a new operating system to replace the Mac OS, the two final options were BeOS and NeXTSTEP. The deal swung towards NeXT due to the persuasive influence of Steve Jobs and the incomplete state of the BeOS product, criticized at the time for lacking such features as printing capability. Ultimately the assets of the corporation were bought by Palm, Inc., where GassÃ©e served on the board of directors, for US$11 million in 2001, at which point the company entered dissolution. The company then initiated litigation against Microsoft for anti-competitive business practices, specifically the prohibition of OEM's to allow dual-boot systems containing both Microsoft and non-Microsoft operating systems. The suit was settled in September 2003 with a US$23.25 million payout to Be, Inc. History from StockResearch.pro (Professional Old Stock Certificate Research Service).