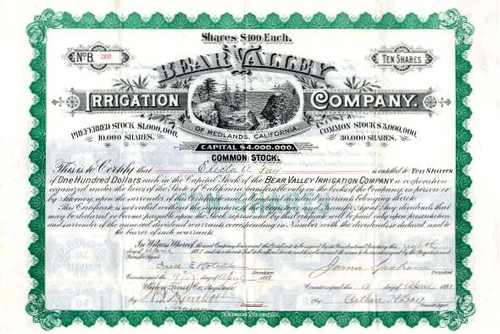 Beautifully engraved RARE certificate from the Bear Valley Irrigation Company issued in 1891. This historic document was printed by S.D. Childs & Company and has an ornate border around it with a vignette of a view of the New Bear Valley Dam. This item is hand signed by the Company's Officers ( James Graham as president and Fred E. Hotchkiss as Secretary ) and is over 111 years old. 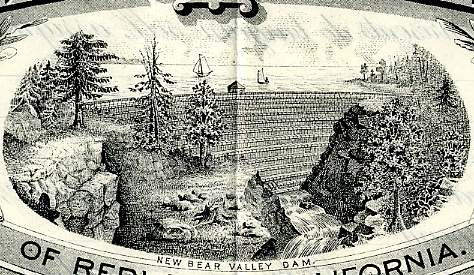 Certificate Vignette
In 1883, Frank Elwood Brown, co-founder of Redlands, traveled with Hiram Barton (vineyardist and sheep rancher) to Bear Valley in search of the perfect place for water storage to be used for the valley's farms in summertime. There are conflicting stories about how Brown knew to look in Bear Valley, but some say he read about it in the San Bernardino Weekly Times article published by Fred Perris in 1880 regarding this area's potential for water storage. After surveying the area, Brown was faced with the challenge that most of the valley was privately owned and used for sheep and cattle grazing. J.S. Slauson, a wealthy Los Angeles banker, and an ex-miner named Richard Garvey owned most of it, while Southern Pacific Railroad owned another section. Brown purchased a 20-day option on Bear Valley for $500 and he used these 20 days to take innumerable trips with potential investors to see the site. By the end of the allotted time, the Bear Valley Land and Water Company was formed. Bear Valley Land and Water was almost continually involved in litigation over water rights and although they usually won it was costly, in time and money. The goal was to retain rights to the entire water supply. As the rights were being secured, Brown started building the dam in July 1883. It was not until July of 1885 that the first water flowed from the dam. In about 1889-90, Brown began a series of selling stocks from his own companies to other companies that were his own. After organizing the Bear Valley and Alessandro Development Company in 1889, they bought all of the Bear Valley Water Company (and 20,000 acres of the Alessandro. They then incorporated the Bear Valley Irrigation Company, which bought all of the original Bear Valley Land and Water Company, including the dam, from Bear Valley and Alessandro. After the financial panic of 1893, the Bear Valley Irrigation company filed for bankruptcy. (Ref: The San Bernadinos by Robinson, publisher Big Santa Anita Historical Soc., pp169-178; Only One Redlands, 1963, pp102-105 Holabird)