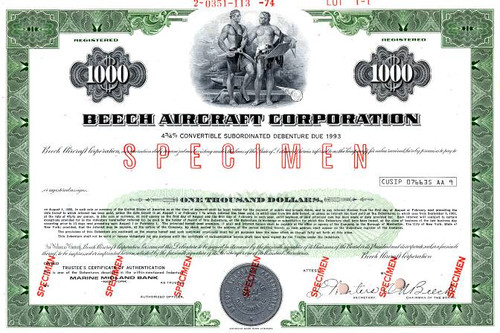 Beautifully engraved convertible bond certificate from the Beech Aircraft Corporation printed in 1974. This historic document was printed by American Bank Note Company and has an ornate border around it with a vignette of two allegorical men, one holding a propeller, with planes flying in the background and the company logo. This item has printed signatures by the Company's Chairman(Olive Ann Beech ) and Secretary (L. Winters). 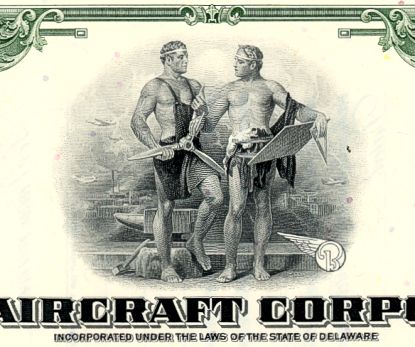 Olive Ann Beech as President
In 1932, Beech Aircraft Corporation established was in Wichita, Kansas. In the darkest year of the great depression, Walter H. Beech and Olive Ann Beech moved back to Wichita. In April 1932, they established the Beech Aircraft Corporation. Mr. Beech was the president and Mrs. Beech was secretary-treasurer. In the 1930s, the first Beechcraft produced is the Model 17--the classic Beechcraft "Staggerwing." Designed especially for the business traveler, the airplane proves to be faster than military pursuit airplanes of the day and wins numerous air races. In 1937, Beech introduced the Model 18 "Twin Beech." This airplane is to business what the DC-3 is to the airlines. Produced until 1970, the 33 years of continuous Model 18 production was a record until surpassed by the Beechcraft Bonanza. During World War II, more than 14,000 Beechcrafters produce some 7,400 airplanes for the United States and Allied armed forces. It is estimated that 90 percent of all U.S. Army Air Corps bombardiers and navigators are trained in AT-7 and AT-11 aircraft--derivatives of the Beechcraft Model 18. Following the war, in 1947, Beech introduces the Model 35 Beech Bonanza. The new Beech is a high-performance, single-engine, business airplane. Its record for continuous production is still lengthening. In 1961, Beech introduced the Baron B55, the forerunner of today's Baron 58, one of the most popular owner-flown twin-engine aircraft available. In 1964, Beech introduced the Model 90 Beech King Air. It quickly establishes itself as the industry standard in corporate jetprops. Today, the various King Air models maintain a market share of more than 90 percent in their class. In 1968, Beech entered an expanding commuter airline market with the Beechcraft 99 Airliner. In 1974, Beech delivered the first Beech King Air 200, which brings new standards of room, speed, and passenger comfort to a business airplane. Beech has delivered nearly 2,000 Model 200s in civilian and military versions. In 1975, Beech delivered the first C-12--the military version of the Beech Super King Air 200--to the U.S. Army. Today, all four branches of the U.S. Armed Forces--Army, Navy, Air Force, and Marine Corps--fly C-12s in various configurations. The Navy also uses Beech T-34C jetprop trainers for primary flight training, and versions of the Beech King Air Model 90, designated T-44A, for multi-engine training. On February 8, 1980, Beech Aircraft Corporation became a subsidiary of Raytheon Company, a diversified electronics and technology company located in Lexington, Massachusetts. About Specimen Certificates Specimen Certificates are actual certificates that have never been issued. They were usually kept by the printers in their permanent archives as their only example of a particular certificate. Sometimes you will see a hand stamp on the certificate that says "Do not remove from file". Specimens were also used to show prospective clients different types of certificate designs that were available. Specimen certificates are usually much scarcer than issued certificates. In fact, many times they are the only way to get a certificate for a particular company because the issued certificates were redeemed and destroyed. In a few instances, Specimen certificates were made for a company but were never used because a different design was chosen by the company. These certificates are normally stamped "Specimen" or they have small holes spelling the word specimen. Most of the time they don't have a serial number, or they have a serial number of 00000. This is an exciting sector of the hobby that has grown in popularity over the past several years.