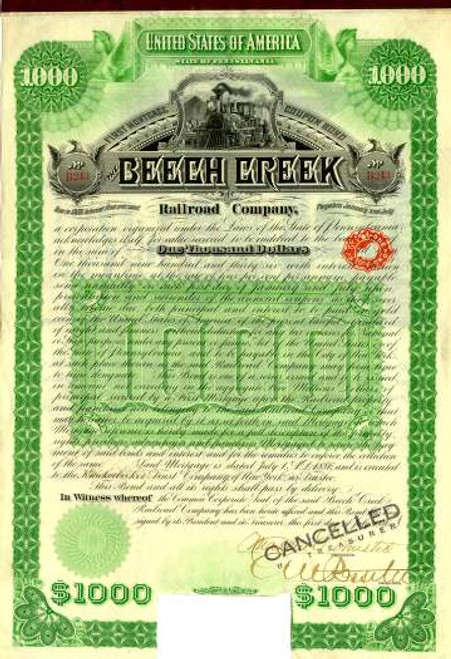 Beautifully engraved certificate from the Beech Creek Railroad Company issued in 1886. This historic document was printed by the American Banknote Company and has an ornate border around it with a vignette of a train. This item is hand signed by the company's president, (M E. Olmstead) and treasurer (E. V. W. Rossiter) and is over 114 years old. The last coupon paid on the bond was in the bottom center which is why there is a small section cut on the bond in the scanned image. The Company was organized in 1886 as successor to the Beech Creek, Clearfield and Southwestern RR sold under foreclosure in 1886. These bonds were used to finance the new company. The bonds were guarnateed by the New York Central and Hudson River Company and were signed by Chas. C. Clarke and Edwin D. Worcester. The Beech Creek Railroad was formally call the Susquehanna & South Western Railroad. The Beech Creek District consisted of the trackage from Jersey Shore Jct. southward and westward. The balance of the trackage, from Newberry Jct. (near Williamsport) to Jersey Shore Jct. and northward into New York State was the Fall Brook District. Coal from the Clearfield District, for which the Peale area was a part, moved to Newberry where it was interchanged with the Reading Railroad for forwarding to tidewater, or continued northward into New York for other coal users in the East. The output of the Clearfield Bituminous Coal Corporation mines was used for company supply coal by the NYC's Lines East (of Buffalo). The Beech Creek was leased by the New York Central & Hudson River Railroad Company on December 15, 1890, retroactive to October 1, 1890, for 999 years. For almost another ten years the Beech Creek continued to operate independently of the NYC&HR. On July 1, 1899 the Beech Creek's independent operation ended, and it became part of the NYC&HR's Beech Creek District of the Pennsylvania Division. The New York Central, successor to the New York Central & Hudson River Railroad, continued to lease the Beech Creek for decades to come. Not until May, 1948 did the NYC move to acquire control of the Beech Creek through stock ownership. Despite the NYC's control of as much as 79 per cent of the Beech Creek's stock, the lease relationship continued. The New York Central merged with its archrival, the Pennsylvania Railroad Company, in 1968 to form the Penn Central. Just two years later the PC declared bankruptcy paving the way for the arrival of Consolidated Rail Corporation (Conrail) in 1976. Much of the above information was obtained from the Peale, Pennsylvania website and was written by Jeff Feldmeier.