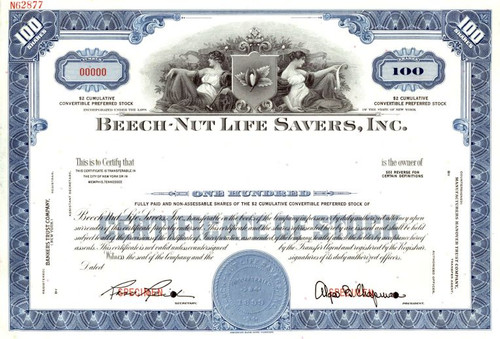 Beautifully engraved specimen certificate from the Beech-Nut Life Savers, Inc. . This historic document was printed by the American Banknote Company and has an ornate border around it with a vignette of allegorical women. This item has the printed signatures of the Company's officers. 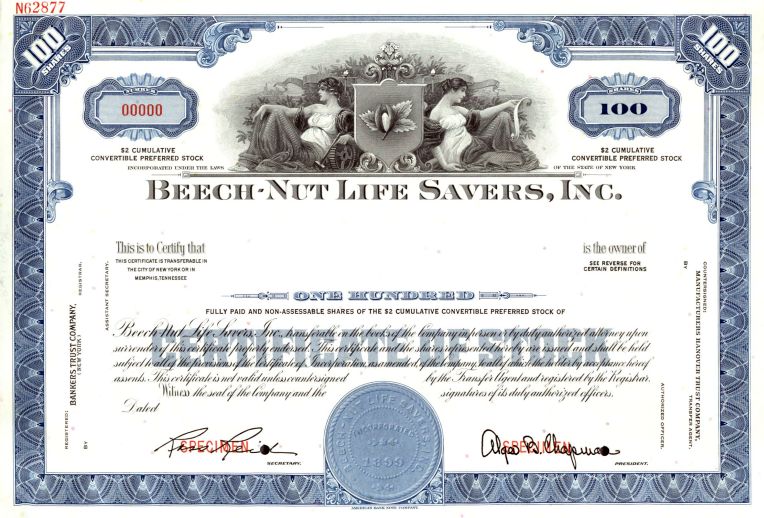 Certificate
Life Savers is an American brand of ring-shaped hard candy. Its range of mints and artificial fruit-flavors is known for its distinctive packaging, coming in paper-wrapped aluminum foil rolls. Candy manufacturer Clarence Crane of Garrettsville, Ohio, (father of the poet Hart Crane) invented the brand in 1912 as a "summer candy" that could withstand heat better than chocolate. The candy's name is derived from its similarity to the shape of life preservers used for saving people who have fallen from boats. After registering the trademark, Crane sold the rights to his Pep-O-Mint peppermint candy to Edward John Noble for $2,900. Instead of using cardboard rolls, which were not very successful, Noble created tin-foil wrappers to keep the mints fresh. Noble founded the Life Savers and Candy Company in 1913 and significantly expanded the market for the product by installing Life Savers displays next to the cash registers of restaurants and grocery stores. He also encouraged the owners of the establishments to always give customers a nickel in their change to encourage sales of the $0.05 cent Life Savers. The slogan "Still only 5 cents" became a favorite treat for children with a tight allowance. Since then, many different flavors of Life Savers have been produced. The five-flavor roll first appeared in 1935. A series of mergers and acquisitions by larger companies began in 1956. Life Savers is currently a property of Mars, Incorporated. In recent decades, the brand expanded to include Gummi Savers in 1992, Life Saver Minis in 1996, Creme Savers in 1998, and Life Saver Fusions in 2001. Discontinued varieties include: Fruit Juicers, Holes, Life Saver Lollipops and Squeezit. In 1956, Life Savers Limited merged with Beech-Nut. History from Wikipedia, Encyberpedia and OldCompany.com (old stock certificate research service) About Specimen Certificates Specimen Certificates are actual certificates that have never been issued. They were usually kept by the printers in their permanent archives as their only example of a particular certificate. Sometimes you will see a hand stamp on the certificate that says "Do not remove from file". Specimens were also used to show prospective clients different types of certificate designs that were available. Specimen certificates are usually much scarcer than issued certificates. In fact, many times they are the only way to get a certificate for a particular company because the issued certificates were redeemed and destroyed. In a few instances, Specimen certificates were made for a company but were never used because a different design was chosen by the company. These certificates are normally stamped "Specimen" or they have small holes spelling the word specimen. Most of the time they don't have a serial number, or they have a serial number of 00000.