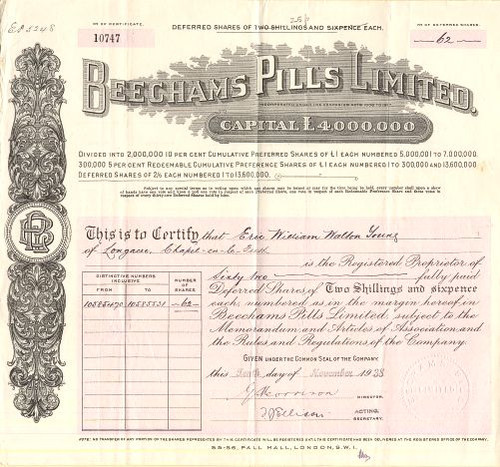 Beautiful incancelled certificate from the Beechams Pills Limited issued in 1938. This historic document was printed by Eden Fisher & Company and has an ornate border around it with a vignette of the company name. This item has the signatures of the Company's Director and Acting Secretary and is over 70 years old.

Certificate Vignette
Beecham was the family business of Thomas Beecham (18201907), a chemist. He was the grandfather of the conductor also named Thomas Beecham (18791961). As a boy, he worked as a shepherd, selling herbal remedies as a sideline. He then started as a travelling salesman or peddler; subsequent success enabled him to open a shop in Wigan. Their first product was Beecham's Pills, a laxative, in 1842. Beecham opened its first factory in St. Helens, Lancashire, for the rapid production of medicines in 1859. Under Thomas' son, Sir Joseph Beecham, 1st Baronet (18481916), the business expanded, but remained a patent medicine company and engaged in little research. Beecham bought companies for various products, adding the Lucozade glucose drink and Macleans toothpaste to its product chain in 1938. By buying another company the following year, it added hair products for men. In 1943, it decided to focus more on improving its research and built Beecham Research Laboratories. In 1944, the company was named Beecham Group Ltd. In 1945, Beecham Research Laboratories Ltd. operated from Brockham Park, Surrey. By the mid-1950s, the group comprised some 100 smaller companies, including a large wholesale grocery business that was later sold off. In the 1950s to 1960s, Beecham, in consort with Bristol-Myers, developed penicillin derivatives: first pheneticillin, then the more potent methicillin (Celbenin). Later, these were followed by Ampiclox and others as the group focused on pharmaceutical development. In 1953, it bought C.L. Bencard, which specialized in allergy vaccines. In 1957, company researchers isolated the penicillin nucleus 6-aminopenicillanic acid (6-APA); this discovery allowed the synthesis of a number of new semisynthetic penicillins. In 1959, Beecham marketed Broxil (phenethicillin), followed shortly by Celbenin (methicillin), which is active against Staphylococcus aureus. In 1961, Penbritin (ampicillin) hit the market, and soon Beecham's facilities were inadequate for the worldwide demand. A 35-acre complex at Worthing came on line in the early 1960s to produce 6-APA, the base for semisynthetic penicillins. In 1972, Beecham launched Amoxil, which went on to become one of the most widely prescribed antibiotics. In 1981, Augmentin, an antibiotic used to treat an array of bacterial infections, was introduced. In 1989, The Beecham Group plc and SmithKline Beckman merged to form SmithKline Beecham plc. In 2001, SmithKline Beecham and Glaxo Wellcome merged to form GlaxoSmithKline. History from Wikipedia and OldCompanyResearch.com (old stock certificate research service).